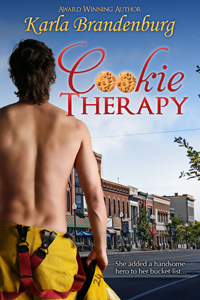 To escape notoriety from her role in the school shooting she barely survived, Elizabeth Lambert moves from Houston to Hoffman Grove, Illinois. Plagued by panic attacks and nightmares, she’s determined to embrace her second chance at life, knowing that death could take her in an instant. A one-night stand with a local handsome firefighter should remind her that she’s alive, but like a good cookie, once is not enough to satisfy her craving. Will he reject her when he learns about the blood on her hands?

Firefighter and paramedic Matt Billings fights his attraction to the alluring new bookshop manager. She dangles a one-night stand under his nose, but the last time he gave in to such an offer he ended up with a child. He is determined to be a better man than his philandering father. Can he convince Elizabeth that her past is not as terrifying as suddenly being a parent, and a relationship is worth more than just a checkbox on her bucket list?

What Inspired You to Write Your Book?
This book is the fourth in a series. After writing a complicated character, Cinda, in Book 2 (Living Canvas), I had to redeem her in Book 3 (Return to Hoffman Grove) and that inspired me to redeem Matt, the cheating paramedic, in Cookie Therapy

How Did You Come up With Your Characters?
The characters are mostly "out of thin air." Cinda was originally based on a questionable friend I had growing up – she means well, but she's a bit abrasive. She counterbalances Audrey, the perfect one, and Brody is based on someone I knew in high school. Matt's looks were inspired by a young Jackson Browne (the singer) and Elizabeth just wandered in out of my imagination.

Book Sample
In spite of the grime that threatened to choke Elizabeth, the apartment had possibilities, like her. It needed someone who would love it.

She sputtered. As if anyone would ever love her. Her own mother didn’t love her. Elizabeth was definitely a fixer-upper if anyone was willing to spend the time. She might be beyond hope, but she could transform this apartment.