You are here: Home / Fiction / Clotho’s Loom by Shawn StJean 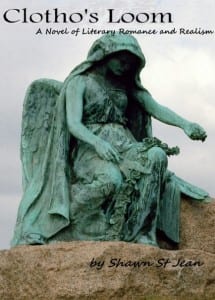 William Wyrd, an introverted history professor at long remove from his youthful days as a marine sniper, is drafted to serve overseas in the U.S. military at age thirty-nine. Already in a relationship made tenuous by the demands of dual professional careers and their own dearth of interpersonal experience, he and his wife are completely estranged by the blunder on the part of the government. But is this merely human error at work, a bad mix of circumstances—or tangling of the skein of Fate? In the tradition of Robert Ludlum’s Bourne Identity and follow-up novels, this literary action-adventure tale tests whether one’s present choices, and even ultimate destiny, need be determined by one’s past.

CLOTHO’S LOOM tracks the struggles of a husband and wife to reunite against forces arrayed to keep them apart. Will decides to keep his reactivation a secret, and deal with the claims from his dark past alone. Assured by faceless authorities that there has been no mistake, and given a date to report, he falls in with political undesirables and succumbs to their attempt to recruit him. He soon embarks on a quest for identity that leads him around the globe. Meanwhile, his partner, pregnant and abandoned, must navigate the no-less-treacherous task of survival at a highly politicized law office, dominated by two temperamentally opposite bosses, and the glass ceiling they erect over her. The narrative proceeds in an alternating chapter structure, paralleling Will’s masculine adventures with those of a woman enduring both professional and domestic perils. The common solution: a razing of egos, and the tempering of two spirits into alloy, alchemized by the common love of a child.

Author Bio:
I’m a college professor in Rochester, NY. My other books are “The Yellow Wall-Paper” by Charlotte Perkins Gilman: A Dual-Text Critical Edition (2006) and Pagan Dreiser: Songs from American Mythology (2001).

What Inspired You to Write Your Book?
Neverending conflicts in the Middle East, which included my generation and are now threatening to cripple the next.