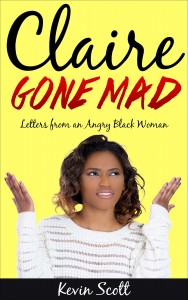 As the saying goes, “If Mama ain’t happy, ain’t nobody happy”, but when your Mama can smell money before it’s even been printed, there’s no telling what she will do to get her hands on it, just to fulfill her insatiable need to have it all!

Claire Scott is the quintessential gold digger. Whatever she has to do to get over on her son Ken, she’s willing to do. If that means bombarding him with emails because he’s long since cut off ties with her in every other way, then, a Mamas got to do what a Mamas got to do.

In order to keep his mother away from his money, his place of work and his girlfriend, Ken will need more than his Ivy League education to outrun and outsmart his conniving, manipulative, histrionic mother and her endless supply of mayhem and shenanigans.

What’s a son to do when the woman who gave him life now wants to take it all away from him by any means necessary?

What Inspired You to Write Your Book?
Everyone has at least one crazy person in their family with stories most people would not believe, but fortunately (or unfortunately) for me I have all of those crazy stories in emails. My mother likes to send out lengthy emails when she has a bone to pick with my family and me and I thought “these things are so crazy, why not compile them into a book so other people can take comfort in the fact that there are other families out there that are just as crazy as theirs?” I decided to create this book as a way for people with crazy families or those going through crazy times to just sit back, relax, and laugh at my crazy family.

Book Sample
Dear Umed:
Thank you for taking the time to meet with me on March 20th. I would like to meet with the Board of Directors of Yale regarding the problems that my family has encountered since Kevin attended your program. This is clearly a problem for us and for many others in this country. It was not until about a week and a half after I met with you to tell you about Kevin that I saw an interesting editor’s opinion in the Wall Street Journal: It was called “Opressed by Ivy League” in which the students created a freedom budget because these schools are almost entirely designed for white males. They dubbed Dartmouth College, “White Supremacist U”. The writer thought that they should leave, but I say, not so fast. There is a real problem here.
I had complained about the after effects of what these students are complaining about in the present. Kevin Scott was a BETA phase student in your program. Although he was a test case for you, he is my son and I believe that Yale is where I lost him to a mentally defective thought pattern against his own family. As a result, what came back home to us was the equivalent of a shell-shocked war veteran. My son is mentally ill and can be equated to a white supremacist in a Black man’s body.
He returned to curse me because I could not afford to pay all of his tuition for his Master’s Degree after his father could not pay his part. I was shocked that when I got to Yale with Kevin that he was the only African American Male in the Computer Software Engineering Program. This is disturbing also, given that this public institution has been around since 2 years after slavery ended and it has not been able to reach the African Americas where they are and meet their needs. Unfortunately, this story is all too familiar throughout America.
Kevin has continually dissociated himself from his family, living with his grandfather until he got a apartment, then moving without even giving him his address or ever calling again, even for the holidays. He moved into an apartment with a white girl, and does not allow us to visit. He is so different from anyone that I know and this was not evident at Georgia State, but became clear at Yale. Apparently the disparity (difference in wealth and access), is so vast from what Kevin grew up with that he can live in Jonesville with his two brothers and father there and never visit them. He cannot even call his mother on Mother’s Day. What did you do to my son? It was not healthy. I am very concerned about this problem. On his Facebook is only white people, not his family. This is what all white environments do to black men. No white man can teach a straight black boy to be proud to be black if they do not include masculine black men on their staff.
I need immediate cooperation from Yale to intervene and help. Kevin must agree to participate in mental health counseling with his family and Yale must agree to pay for it. They must also agree to implement a very aggressive, closely monitored, diversity program without any delay. This school was funded with public funds from the citizens of Connecticut and what equates to billions in land and money. The Mayor would not allow this to happen and have a board of directors and administration that looks nothing like the real population of Connecticut. I will not allow this to happen and not tell someone. I have been invited to respond to the articles, in NY Times and WSJ. I refrained, hoping that Kevin would at least talk with me about the problem and get some mental help on his own. Time is of the essence. Although it is the crux of the problem of blight and poverty, with black America, it goes unnoticed. We cannot afford for our public institutions to not implement diversity programs at their inception.