You are here: Home / Bargains and Freebies / Bargain Books Under $3 / Children of Kathaldi: Book One of the Kathaldi Chronicles by Ron L. Lahr 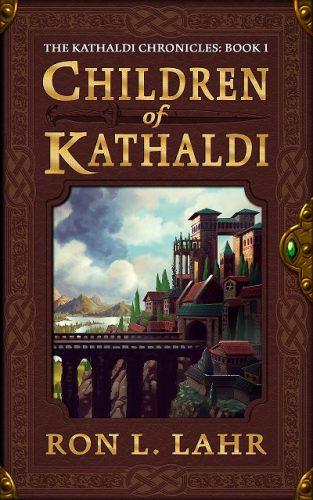 A thief with dreams of adventure. An eternal battle against the Gods. Free drinks and grateful women.
Dirk is a scoundrel. Some would say a jerk. He’ll admit it. But his ambition only goes as far as his next heist. It’s not that he’s against noble causes or grand adventures. To hear him tell it, he’s had a few. As long as there’s something in it for him.
But when a childhood friend shows up with an unbelievable tale, Dirk must decide if he really is up for adventure worthy of the songs of bards. The last time the Kathaldi battled the Gods, they nearly destroyed the world. Can Dirk and his companions prevent the world from sliding into chaos once more?
If women and treasure await, he’s going to give it his best shot.
Come explore a richly detailed world of madness, monsters and mayhem, and help write the next chapter of The Kathaldi Chronicles.

What Inspired You to Write Your Book?
This story was inspired when I was idly thinking about what Atheists would do if God revealed him/herself and there was no denying it. Would they worship God? Then I thought about how that would play out in a fantasy setting. That led to the creation of my bad guys – the Kathaldi. They know the Gods are real but they refuse to follow them and encourage others to turn away from them, sometimes at the point of a sword. Soon I had the entire story for the trilogy.

How Did You Come up With Your Characters?
The story demanded certain characters. I usually try to give each of my characters bits and pieces of people I know to flesh them out. I even note the names of the real people I'm using for inspiration in my notes.

Book Sample
Chapter 1 – The Beginning
Look, I’m not writing this to feed my ego. Or to get free drinks, or have ladies throw themselves at me. I’m sure that will all happen, but it’s not why I am doing this. This is for my children. I want them to know me and what I accomplished. What I was a part of. A big, significant, important, part of.
Unfortunately, I don’t know exactly who my children are but, mathematically, I figure I must have a bunch of them. This way, I don’t have to track them down individually and talk to them face to face. It’s a big time-saver for me. Great idea, right? As you read this you’ll see that I’m kind of an ideas guy.
So, to start off you should know that before the important events in this book took place I had some trouble with the authorities from time to time. I would not exactly say I was a thief, but that’s because thievery has a pretty bad reputation. A lot of other people did describe me that way, and I admit that it was accurate.
But, before I get too far ahead of myself I suppose I should step back a little, just to the beginning. My beginning. I was born. I was named Dirk because my father had to sell his favorite one to pay the midwife when I was born, and he wanted me to remember it. He liked reminding me of what they had to give up for me just to pop out of my mother. They were pleasant like that. "It was a difficult birth," my mother would often say. "And it ain't gotten any easier since!" They would both say that last part together, if they could. It never got old. Seriously. Never. Still funny. It's hard to say who I got my own awesome sense of humor from because they were both so darned hilarious.
At some point my dad left so my mom had to finish raising me and my siblings on her own. It didn’t bother me. And if it did, I am completely over it. It’s not a big deal. The important, relevant, part is that I had a friend. And not just that I had a friend, but who he was.
Thilos. He was an orphan who was being raised by a crippled friend of the family who actually turned out to be a good guy. One of the best. See, not all cripples are awful. Anyway, not your normal, unhappy, sad, orphan story. It’s kind of sweet, really.
Anyway, we met as kids, running around the streets, playing, having fun, and maybe causing a little bit of trouble. He taught me to fight and also how to read. Neither very well, mind you, we both needed other, better, teachers later on. But I might never have
learned how to read if my new friend hadn't convinced me how cool it would be. I'm not sure he was right about that, it's never gotten me any women, but I’ll admit that it has been extremely helpful.
The really important and relevant part is that we were still friends when the events in this book began, which is why he looked me up that day when he was in big trouble. By the way, this is not supposed to be some fancy foreshadowing – like we are enemies now, or something – it is just me trying to manage what to say and when to say it in terms of the present and the future. It’s kind of tricky. I don’t want to give things away too soon, or too late, or too never. I’m just a guy, trying to tell an amazing story, while some people judge me for every single fricking thing I do.

Links to Purchase Print Books
Buy Children of Kathaldi: Book One of the Kathaldi Chronicles Print Edition at Amazon

Links to Purchase eBooks – Click links for book samples and reviews
Buy Children of Kathaldi: Book One of the Kathaldi Chronicles On Amazon