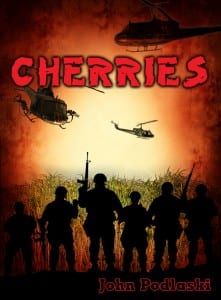 When a soldier leaves for war, those left behind often wonder what their loved ones are experiencing. Letters home are always cheerful and vague – no sense in worrying the family. Then upon returning home, these young soldiers do not want to talk about their experiences. Family and friends allege they are now distant, changed, and not the same person they remember from several months earlier. What causes this?
Although the backdrop for this novel is the Vietnam War, “Cherries” exist in every war. They are the young “Newbie” soldiers, who are trained for war. However, most are not ready to absorb the harsh physical, mental and emotional stress of war. Once they come under fire and witness death firsthand, a life-changing
transition begins. This eye-opening account offers readers an in-depth look into the everyday struggles of these young infantry soldiers. You’ll feel their fear, awe, drama, and sorrow, witness the bravery and sometimes laugh at their humor.
No two war experiences are the same, but after finishing “Cherries – A Vietnam War Novel”, readers will have a much better understanding as to why these changes occur and why our military heroes are different upon their return home. Veterans will relate!

Targeted Age Group:
13 and up

How is Writing In Your Genre Different from Others?
It really isn’t different, but as a fiction writer, I have the latitude to embellish wherever needed to heighten the suspense or drama and to help move the story along.

What Advice Would You Give Aspiring Writers?
Don’t worry about editing at the beginning. Put together an outline, check your facts and then write whatever comes to your mind. Flesh out the outline and work toward the conclusion you are looking for. When you believe your work is completed and at it’s best, then turn it over to a 3rd party to edit. Every time I read my story, changes come to mind that I want to implement. Continuing to do this eats up the available time you have for the next project.

Author Bio:
John Podlaski served in Vietnam during 1970 and 1971 as an infantryman with both the Wolfhounds of the 25th Division and the 501st Infantry Brigade of the 101st Airborne Division. He was awarded the Combat Infantry Badge, Bronze Star, two Air Medals, and a Vietnamese Cross of Gallantry. He has spent the years since Vietnam working in various management positions within the automotive industry and has recently received a Bachelor of Science degree in Business Administration. Now works in sales and logistics for a Belgium company that supplies gears and shafts for transmissions and diesel engines. John is a member of Vietnam Veterans of America Chapter 154 and lives with his wife, Janice, in Sterling Heights, Michigan. They own a 1997 Harley Davidson Heritage and are both members of the Great Lakes Chapter of South East Michigan Harley Owner’s Group. This is his first novel.

What Inspired You to Write Your Book?
During the late 1970s, new movies depicting the war in Vietnam (i.e. “Apocalypse Now” and “The Deer Hunter”) were released. I was anxious for the films to show others what I had experienced, but Hollywood let me down – neither was a realistic interpretation of my time during the war. Most war movies, in general, are filled with bravado and do not touch upon the innocence, naivety and fear that many of us endured while in Vietnam. I was not a hero with goals of ending the war within the next few months; I was a scared teenage boy trying desperately to fit in and survive. So what was it really like for me in Vietnam?

My mother saved every letter written home from Vietnam and presented the boxful to me in the early 1980’s. My wife and I spent hours reading through them and sharing new discoveries. We had also come across a pocket diary that I maintained during the war; each page having either an entry summarizing the events of the day or an inner thought or concern.

My wife, Jan was in awe and soon realized that she was witnessing a part of me that she’d never known. “With all this, could you write a paper about your experience?” My wife asked, “something to help me understand?” So began the quest to tell a story about my time in Vietnam – the seed will sprout and “Cherries” will be the fruit of my labor.