You are here: Home / Children and Young Adult Books / Changeling by Leigh Teale 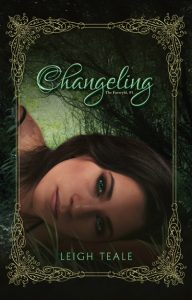 Tinsley Scott isn’t having the greatest year. Her boyfriend refuses to let her meet his family, her mother is convinced she’s on drugs, and her little sister’s meddling has hit an all-time high. When she tries to run away from her problems, though, they only get worse. One accidental plunge through a puddle later and she finds herself in the mysterious Faewyld. There, she learns that she’s a changeling, the spirit of a dead Fae who took refuge in a mortal body. Now she has a whole other world she can escape to.

But being a long-lost fairy princess has its own set of problems. War, magic, betrayal… Death. Suddenly, passing calculus doesn’t seem like such a big deal.

What Inspired You to Write Your Book?
I originally had the idea for a children’s book in the tradition of Mary Downing Hahn, where a young girl pretends to play with some fairies in the woods and slowly comes to believe that they are real until the reader doesn’t know whether they are or not. But then I watched a documentary on teen drug use and parental intervention and before I knew it the two ideas had become one.

How Did You Come up With Your Characters?
It sounds silly, but my characters tend to spring fully formed into my mind, like Athena. Very rarely do I have to sit down and “come up with” a character.