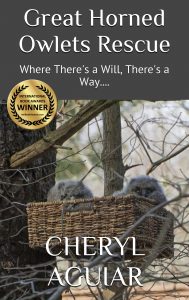 Great Horned Owlets Rescue by Cheryl Aguiar Cheryl Aguiar has a strong connection with wildlife and a great love for exploring nature. This is the story of how she gains the trust of one of Mother Nature’s most magnificent and mysterious creatures…the Great Horned Owl. These majestic birds known as raptors have a reputation of being extremely aggressive, but show a different side when struck by tragedy. With some help from her husband, Cheryl’s devotion and determination to help this family … END_OF_DOCUMENT_TOKEN_TO_BE_REPLACED

What inspired you to write your book? When my then 11-year-old son's book "Christopher Bullfrog Catcher" was published, I talked with him about making it into a series of pet care books. He agreed, and I began taking notes for him on different pet care books to write. He was again published at age 15 with "Just Chris," a companion book to my memoir "Son of My Soul - The Adoption of Christopher," and at that point decided that he wanted to put his efforts and energy into music and … END_OF_DOCUMENT_TOKEN_TO_BE_REPLACED 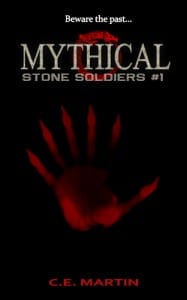 Teens Josie Winters and Jimmy Kane are drawn into a world of monsters and magic they never knew existed when they find a soldier lost in the Arizona desert. Colonel Mark Kenslir is the last of the cold war supersoldiers, and he's just come back from the dead. With his memory partly missing, he sets out to remember who, or what, killed him. Can the Colonel complete his last mission, or will the heart-eating shapeshifter he hunted kill him again? The first book in a pulp-horror series that pits … END_OF_DOCUMENT_TOKEN_TO_BE_REPLACED