You are here: Home / Fiction / Paranormal / Catching Feathers in the Wind by Diane Hall 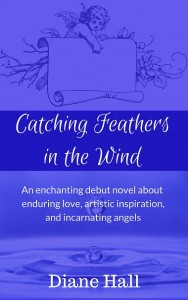 Jayna is an Archangel… The only life she has ever known is the one in which she teaches souls to fly in Heaven and whispers inspirations to Earth’s great artists, aided by a range of dead musicians and celebrated artists. In Heaven, angels exist in a prevailing atmosphere of love, peace, joy and harmonious co-creation, so when she decides to incarnate on Earth in human form, Jayna is in for a few surprises.

After a series of challenging life-times, she settles into her final spin of the wheel and prepares to return to Heaven at the completion of her mission. However, during this final lifetime, she has fallen deeply in love with Stephen, the man whose love will force her to question everything she has ever known. How will she find a way to be at peace with a range of human emotions that constantly draw her back towards the Earth? Will she find a way to return for one, last kiss?

A multi-dimensional celebration of life, love, life after death, reincarnation, re-birth and inspiration. A love story that stretches across eternity.

What Inspired You to Write Your Book?
I wrote the first draft of the book back in 2003, as a response to the beginning of the Iraq war. It was kind of a wake-up call. As soon as I heard the news, I felt a powerful sense of desperation. Then, I heard a voice in my head say “Get up and write.” So I did!

At first, I thought I’d write something that would inspire us all to become more peaceful ourselves, and then show our children how to be peaceful. It started off as a piece I thought I might submit to the Times Educational Supplement, about the lack of spiritual guidance in schools, and the effect this might have on future generations and their ability to live in peace. (At the time, I was working as a teaching assistant, and preparing to start my own teacher training later that year). After about page five, it was clear that I needed to write something a bit more substantial, but not knowing what that might be, I just sat slumped in front of my computer feeling a bit hopeless. Then suddenly, these words started streaming through into my mind, kind of coming through me rather than from me…

Then from that point onwards, it was a kind of collaboration consisting of bursts of inspiration followed by bursts of imaginative crafting, in order to create a story that would act as a context for the inspired material that wanted to come through. A kind of human/spirit collaboration.

How Did You Come up With Your Characters?
Really, the characters more or less introduced themselves to me in a very organic way. I suppose Jayna, the incarnated angel, came first, and then the others sort of appeared somewhere along the revealing of her story. I never really sat down and thought any them through or invented them. I just kind of listened to them and shaped them as they appeared.

Buy Catching Feathers in the Wind On Amazon