You are here: Home / Fiction / Mystery/Suspense / Cat in the Flock by Lisa Brunette 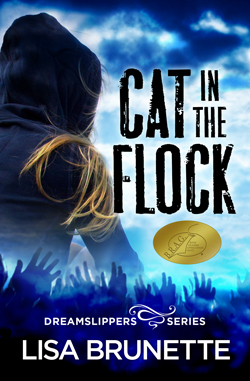 WINNER of the indieBRAG Medallion

The Dreamslippers are a family of PIs who solve crimes using their ability to ‘slip’ into your dreams. But that isn’t easy.

In Cat in the Flock, 22-year-old Cat McCormick begins an unusual apprenticeship with her private investigator grandmother, Amazing Grace, who’s mastered her dreamslipping gift. But following a mother and girl on the run, Cat goes undercover inside a fundamentalist megachurch in the Midwest, where she finds hypocrisy amidst true redemption. But there’s also evidence of a cover-up. Will she tame her wild dream ability in time to discover the truth?

What Inspired You to Write Your Book?
I’d spent a number of years trying to teach, train, and cajole an army of mostly young, mostly male software developers on how to craft game stories for an audience predominantly made up of women over 40. These two groups have polar opposite tastes, and stereotypes and sexism abounded. It was the “angry old lady” that pushed me over the edge. A very stereotyped depiction of a woman showed up in one game—she was hunched over in a rocker with a shawl over her shoulders and a scowl on her face. Knowing the propensity for developers to borrow images from their Internet searches, I suspiciously ran a search on “angry old lady,” and sure enough, there was our gal. So not only was the image a stereotype, but it wasn’t even their original content.

As I grew older and looked ahead to what lay before me, I saw women I knew in their 60s, 70s, 80s, and 90s just didn’t fit stereotypes like this in the media—not in terms of looks or behavior. I’d also by this point been guiding these same developers in how to create mystery plots, and it gave me the unfulfilled desire to create my own from scratch, rather than critiquing, shaping, and massaging someone else’s. So marry the two together, and you have my female-centered Dreamslippers Series. It features a woman in her 70s who mentors her granddaughter in the ability they both share, to slip into other people’s dreams. Both women are strong, even strident at times. I don’t pull any punches with their sexuality or their spirituality, and I’m interested in both in equal measure.

How Did You Come up With Your Characters?
The writer Dorothy Allison once said, “I never read any character like my mama in a book,” and explained that’s why she decided to write. It’s similar for me. I couldn’t think of a single book that depicted a real grandmother/granddaughter apprenticeship. Grandmothers in fiction tend to wear aprons, with their hair in a bun. My Granny Grace character prefers Etienne Aigner, and she’s quite the yogi. But put more simply, I wrote the kind of story I’d want to read.

Sherrie marched into her daughter’s bedroom and dragged a child-sized roller bag suitcase out of the closet. The girl stood in the middle of the room, still in her pajamas. Milk from breakfast had dried around the edges of her lips.
“Ruthie,” the mother said. “I need you to get dressed. We’re going to take a…trip.” Sherrie tried to make her voice sound cheery, but the desperation she felt came through in her tone.
“What’s wrong, Mommy?”
Sherrie set the suitcase on the bed. The bubble-gum pink had once seemed innocent but now looked fleshy and indecent. She glanced at the clock over the bed. He’d been golfing for a good fifteen minutes by now, long enough for her to make sure he didn’t come back for a favorite club or the right gloves. She wanted to be on that morning flight by the time he got home and discovered them gone.
She flung open the chest of drawers and grabbed all of the girl’s socks and underwear, a pair of corduroy pants, black cotton tights, a sweater the color of a Midwestern sky. Nothing pink. Only warm things. Seattle in her memory was cold and wet. It was a grey city; grey clouds over grey buildings. Even the water was grey.
One doll would fit. Made of cloth, it could be folded in on itself and slid down the backside of the suitcase.
“Can I bring the ballerina skirt?”
Any other day, she would have corrected her daughter, who needed to learn the precise names of things. Tutu. There it was in the closet, hanging because it took up too much room in the drawer. She yanked it free, sending the hanger to the floor. Ordinarily, she would pick that up; her house was so clean it hurt her eyes with its spareness—as if theirs were a showroom house, not lived in. She left the hanger there, aware of the thrill this fraction of disobedience gave her. She shoved everything into the little pink case, but with the fluffy tulle taking up so much space, the zipper would not close. The choice was clear. The doll would be a comfort to Ruthie in Seattle, but the tutu would not.
“We’ll come back for this later,” she said, tossing the tutu onto the bed. The zipper closed, the sound of it satisfying.
“No, Mommy!” Ruthie stomped her foot. “I want it now!”
“Then you’re going to have to wear it. Now get dressed while I pack my clothes.” But she felt a pang of guilt for her reprimanding tone, and for having to leave the tutu. Bending down, she used her thumb to wipe some of the milk crust from her daughter’s face. “I’ll let you wear anything you want on this trip, okay, sweetheart? And clean your face with the cloth in the bathroom, like Mommy showed you.”
The girl nodded, as if sensing this was not the time for a tantrum.
Sherrie’s own packing, she did with even less consideration. Under things, shirts. A fleece hoodie. Warm socks. She remembered she needed layers in Seattle. Sometimes it could seem warm even though it rained and the sun had not come out for weeks. Her keepsakes in their tiny, locked chest would not fit. They were the only things she had to remind herself of her life before this, but she would have to leave them behind.
Sherrie kept watch on the clock and glanced out the window twice to make sure his car wasn’t out front even though she knew he wouldn’t be home for another hour. The sun had risen blood-red over the cornfields in the distance, lighting them as if on fire. She’d miss that. And she thought of thunderstorms, which seemed never to occur in Seattle. She’d miss those, too.
Ruthie appeared in the doorway. Her face was clean, but none of her clothes matched. She was wearing pink high-tops that seemed wrong for the city they were going to, the situation, and everything else, but she had apparently decided not to wear the tutu.
“Time to leave.” She took the girl’s hand, promising to herself she’d never let go.