You are here: Home / Bargains and Freebies / Bargain Books Under $3 / Carnal Transgression by Faye Hall 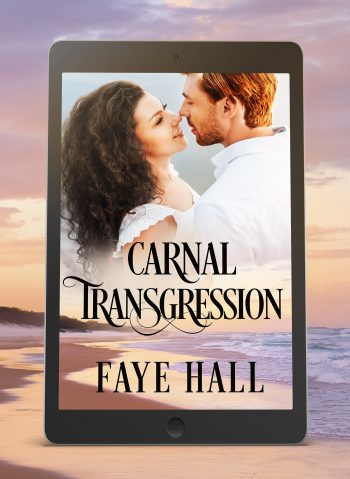 Would you break the law to protect the woman you love from a killer?

Constance Dunbar is desperate to discover who killed her sister. Her plea for help is ignored by the local police, so she advertises for a private investigator. Seamus Tynedale answers the ad, and she immediately recognizes him as the friendly stranger whose arms held her so tenderly as she wept after her sister’s death.

Seamus longed to be reunited with the dark-haired beauty who’d kissed him in the churchyard. When he ends up working for her as a private investigator, he knows that his position as a police constable needs to remain a secret due to her mistrust of the department.

As Seamus hunts for the murderer, he finds himself lured into a den of secrets and lies tracing back eighteen years to Ireland, and it all seems to be connected to Constance. Seamus delves into Constance’s past, hoping to understand the secrets she’s so intent on keeping hidden. What he finds is a passion that ignites his heart and captivates his senses.

When Constance’s life comes under threat, Seamus has to choose between following the law and protecting the woman he loves from a killer. Will he be able to safeguard Constance, or will he lose her to the evil that seems to have followed her to Australia?

What Inspired You to Write Your Book?
My Grandfather's family were Irish and I was always intrigued by the stories of struggle and conflict he and his countrymen were forced to face. Given that his father was also a Police officer in a time of corruption and racism, it seemed like the most natural story line to write.

How Did You Come up With Your Characters?
As mentioned, my Great Grandfather was a police officer during the late 1800s in south east Queensland and that inspired my hero. As for the heroine, she was born from the stories I was told as a child about the strong Irish women who were determined to do anything for their country.

Book Sample
“You have been hard to forget,” he muttered. Her sudden uncomfortable state forced his gaze down to the contents of his glass. Sculling the rest of the drink, he stepped toward her, reaching out to place the empty glass on the desk beside her. “How can you be certain your sister didn’t drown?”
“She was shot,” she explained, a slight tremor in her voice.
“Did she have any enemies that you know of?” he asked. When she shook her head in response, he decided to change the direction of his questions. “How did she live?”
She took a deep breath. “My sister was a woman of considerable means, but she was far more comfortable mingling with those less fortunate than herself.”
“You think she was robbed?” he asked.
She shook her head. “I think she stumbled upon something she wasn’t supposed to and was silenced before she could tell anyone.”
“That’s a serious accusation,” Seamus muttered. “If you’re certain some malice found your sister, why haven’t you gone to the police?”
“I have, but they refuse to help me,” she stated firmly. “As far as the senior constable is concerned, my sister’s death was an accident.”
“And you think me reckless enough to try to overstep his position and do his job for him?” he asked, humored by the idea.
She straightened herself, her features serious. “If you can’t do the job I’m asking of you, sir, I assure you there are others who are willing to take your place.”
He carefully eyed the complete beauty of this woman, fully aware of what men would be willing to do to get into her favor. “Say I agree to handle this investigation, where exactly am I supposed to start? I know nothing about your sister.”
Turning slightly, she reached across her desk, taking a photograph in her fingers. Her gaze lingered on it for a few moments before she handed it to him. “Her name was Agnes.”
Seamus took the photograph, studying the tall, slender, fair-haired woman. She looked so different from the woman standing in front of him.
“You’re welcome to take the photo with you if you think it will help.”
He slid the picture into his back pocket. “How long do I have to complete the investigation?”
“How long do you think you’ll need?”
His hands went to his pockets as he eyed her curiously. “You would trust a stranger to estimate a cost-effective time to complete the task you’re asking, yet you won’t trust this investigation to the police. Why?”
She scowled. “From my experience, sir, the police in this area aren’t to be trusted.”
He knew then it would be best to keep his employed position hidden.
“Do you want the job or not?” she asked firmly.
He could see the crumbling strength of the woman before him. Each time he met her before, never had she been this steadfast. “I offered my help to you in the churchyard, and that offer still stands.”
She let out a shaky sigh of relief. “You will be paid handsomely for your services.” Reaching into the bodice of her gown, she pulled forth several notes of money and handed them to him. “Just so you believe I have the means to pay you what you’re worth.”
He reached for the money, catching her hand before she could pull it away. “Who are you?” he asked, his other hand lifting to her face and lightly tracing her delicate jawline. “All this secrecy and mystery…what are you hiding?” Watching as dread filled her face, Seamus’s hand fell away, and he took a step back from her. “I had no right, but I couldn’t stop the need I had to…” His lips pursed as he cleared his throat. “I want to know what I should call you, miss…”
“You can do away with such formalities. Just call me Stanzie,” she replied cautiously.
Her response confused him. “You want me to address you so familiarly?”
“I want both of us to stay alive long enough for you to do the job I’m willing to pay you for,” she stated. “To achieve that, it is safer for us both if you don’t know my real name.”
He didn’t try to hide his confusion. “Exactly what trouble are you in?”
He could see she was struggling, a slight tremble in her lips. Finally, she took a deep breath. “I do apologize for all the secrecy, sir, but I assure you it is necessary for both our sakes.”
“You can stop addressing me formally too. My name is Seamus Tynedale,” he informed her. A strange look filled her eyes, like she recognized him. “If you could tell me—”
“I can’t,” she snapped.