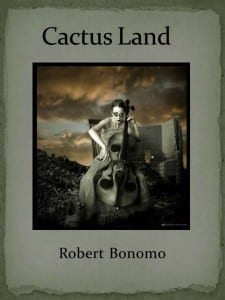 The unease of a world unraveling is the essence of our time and of Cactus Land. In an unknown country plagued by vague wars and illusory terror, six people grapple with truth, love, and the end of time as we know it. The central character’s life slowly disintegrates into a chaos reflected in the world at large. The supernatural becomes intertwined with media propaganda until there is no clear line between the fear in the characters’ minds and the brutal reality they face. The tension builds to a climactic end that does not disappoint.

How is Writing In Your Genre Different from Others?
Mine is more dystopian, more litarary than most sci-fi.

What Advice Would You Give Aspiring Writers?
Try and write 1000 words a day, and only read classics.

Author Bio:
Robert Bonomo is a blogger, novelist and internet marketer. He has lived and worked in Madrid, San Francisco, Buenos Aires, Kamchatka, Miami, Valencia, Cartagena, New York and a few other not so interesting places. He has toiled as a writer, blogger, car salesman, land surveyor, media buyer, spice salesman, transportation salesman, teacher, advertising salesman, marketing manager and consultant (of course he had to be a consultant too).

Robert has written four novels, the latest, Your Love Incomplete will be published in August of 2013. He is also a practicing astrologer and tarot reader.

Robert is a late blooming anarchist and has been published in some of the leading alternative media sites including LewRockwell.com, INFOWARS.com, Global Research.com, Activist Post, Rense.com, Henry Makow, and WhatReallyHappened . When the smoke clears, the tyrants are vanquished and liberty is restored, he will have done his part, God willing.

What Inspired You to Write Your Book?
Visions of an apocalyptic future that came to me in a series of dreams.