You are here: Home / Fiction / Born Under A Bad Sign – A Noir Story 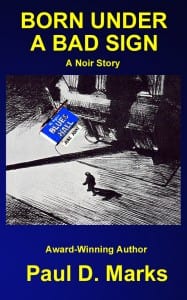 Two brothers are haunted by their past and a mother they never really knew. Which one of the brothers will fall from grace in this dark Oedipal tale? Or will obsession and guilt destroy them both when the past rears its ugly head?

If you like dark, L.A. based noir mystery stories with neon pink flamingos, moody cafes and murder, check out award-winning author Paul D. Marks’ story Born Under a Bad Sign.

Paul D. Marks is the author of over thirty published detective, noir, crime, and sometimes satire, stories. Though not only genre fiction, serious fiction as well. His short stories have appeared in a number of magazines and anthologies and have won several awards. His Award-Winning noir-thriller, WHITE HEAT, is also available on Amazon.

He is also the last person to have shot on the fabled MGM backlot before it bit the dust to make way for housing. According to Steven Bingen, one of the authors of the well-received book, MGM: HOLLYWOOD’S GREATEST BACKLOT: “That 40 page chronological list I mentioned of films shot at the studio ends with his [Paul D. Marks’] name on it.”