You are here: Home / Bargains and Freebies / Bargain Books Under $3 / Born To Die by George A Bernstein 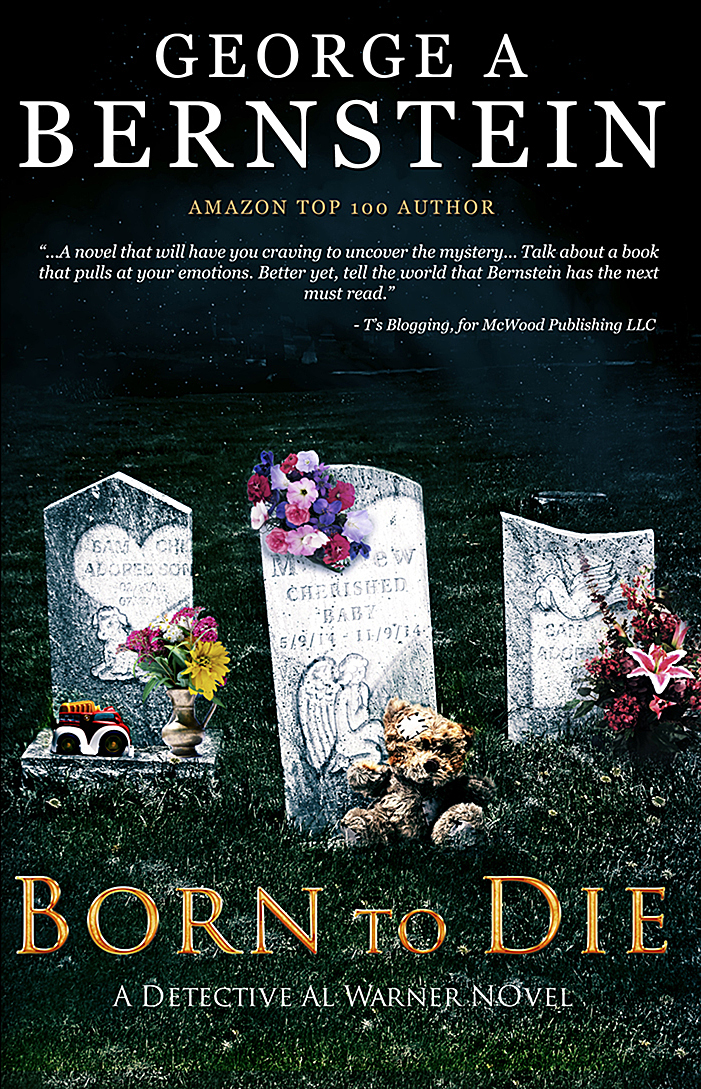 Born To Die by George A Bernstein

Too many infant boys of Palm Beach gentry are dying of Sudden Infant Death Syndrome (SIDS). Only obstetrics nurse, Casey Jansson, is suspicious.
Al Warner, crack Miami Homicide detective, is inactive, languishing on medical leave after a deadly shootout with a serial killer, “The Angel of Death.”
Warner meets Casey at a local pub. Learning of the SIDS deaths from her, Warner concedes it sounds more than coincidental, but can find no obvious Motive or Opportunity. However, he agrees to help investigate, hoping romance develops later.
Casey’s obsession eventually tangles her in mortal danger. Only Warner can save her, if he can figure out where she went, and get there in time.

What Inspired You to Write Your Book?
BORN TO DIE is my fourth novel and the second of my Detective Al Warner series, After writing DEATH'S ANGEL, I realized this could be the beginning of a great series, in the mode of Patterson's "Alex Cross." The stunning and violent surprise ending of DEATH'S ANGEL (no reader has ever guessed it) provided a challange on how to continue Warner's adventures, which I eventually crafted into another 5-Star novel that one professional reviewer called "One of the most masterful plots I've read in a long while"

How Did You Come up With Your Characters?
Al Warner and his group of detectives and forensic experts are all carried over from DEATH'S ANGEL. The female protagonist, Casey Jannson, was someone I needed to be both a bit fragile emotionally, but with strong determination. Frankly, character makeup just sort of "comes to me" as I'm imagining the story. They start out as physical beings, but as the novel develops, they take over the action, changing and developing in ways I never first imagined. Soon they take the story down pathways not originally in my plan. It's an amazing experience to be led by the hand by characters of your own imagination through an unexpected maze.

The bawling had finally sputtered to a hiccupping stop.
Shellie Laughlin cracked the door, peeking into the room. The night-light cast fractured shadows across the bars of the crib. Stevie had been unusually quiet for two hours. Always hungry lately, the little man should be demanding his meal by now. The incessant crying was driving her crazy. Had he finally gotten over the break-in last month? Strange that a five-month old could sense the danger.
She tiptoed to his crib, never tiring of watching her new son, dreaming of his certain future in science or medicine. A little blonde angel, lying there on his back, so still.
Almost too still. She touched his forehead.
Cool. Good. All that wailing had flushed his…
Gee, that’s strange. She put her hand back on his face. Was he too cool? Dropping the side of the crib, she leaned in, listening, but there was no sound. She put her ear close to his mouth.
Still nothing. Shellie gathered him up, but he didn’t wake. His body was strangely slack.
“John.” She turned toward the door, her infant son clutched against her breast.
“John!”
She stumbled from the room, hurrying for their study, where her neurosurgeon husband was reviewing files. He would know what to do.
“Shellie, what is it?” He stood in the doorway, a cup of coffee in his hand.
“It’s Stevie. Oh, God, it’s Stevie.
“He’s not breathing.”

For joining the author’s email/newsletter list you will get:
Excerpts and discounts