You are here: Home / Fiction / Horror / Blooded by Lyn Murray

Nibiru – the winged planet and the Anunnaki of ancient Sumerian text has for decades been the talk of doomsayers around the globe; but is it just talk OR is there truth behind the secrecy and lies?

While BLOODED is a book of fiction – the research and basis behind it lays somewhere between fact and lore; and outwardly reinforces an inner belief, which thanks to a surge in technology is being confirmed on an almost daily basis, that behind every legend – is the seed of truth! 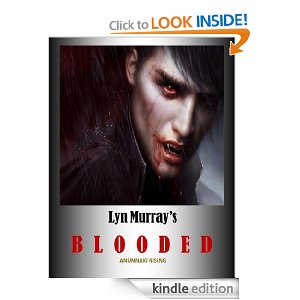 What Advice Would You Give Aspiring Writers?
Keep writing great and inspiring things.

Author Bio:
Lyn Murray was born in Dallas, Texas to a father who at nine-months was adopted from Hope Cottage [as Baby Murray] during the early 1920’s, and the youngest daughter of Irish immigrant parents; whose bloodline played key roles in settling this country, from foot-soldiers and Generals in the American Revolutionary War, to more recent United States’ Presidents, Vice Presidents and Statesmen.