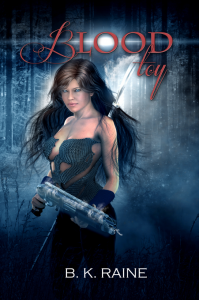 Diane Woods lost the luxury of having an ordinary life on the night a vampire killed her family while she slept. Since then, she has hunted their kind with singular purpose. It was only a matter of time before one started hunting her back.

Christopher Desollador is not just out for blood. He hungers to break her…slowly. Considering the trail of bodies she left for him to follow, you could even say she was asking for it. One sadistic torment at a time, he will teach her what it means to be a victim. Though the lesson she learns just might be her Making.

What Inspired You to Write Your Book?
Vampires have been my obsession since I discovered Dracula in junior high and Interview With A Vampire shortly after. My father eventually refused to keep buying books as fast as I could read them and told me if I wanted a book, I’d better start writing one. Naturally, vampires were the first characters I created.

How Did You Come up With Your Characters?
I was something of a stalker in high school. I watched people carefully, even followed the interesting ones, and took notes I called ‘character sketches.’ Eventually these became my characters, highly exaggerated of course. They didn’t call me ‘the weird girl in the trench coat for nothing.’

Book Sample
The receptionist was gone when I entered and the lobby almost vacant, except for the dark-haired man seated in the very same chair where I had waited to meet Harlin. He claimed a wide territory, arms spanning the backs of two chairs, legs spread, keys and cell phone arranged on the coffee table on top of aging copies of GQ and Money magazine. He leaned forward when I entered and fixed me with a hard stare that made the room feel too small for both of us.
He stood when I passed him and cornered me at the elevator. I considered the stairs, but decided against them. What if he followed? I didn’t have a backup syringe, not to mention I was underdressed. I made a mental note to be better prepared in the future. Always carry two syringes and never, ever wear a skirt.
“Going down?” he asked.
I didn’t trust myself to speak, so I just nodded. He reached over me and pressed the button to call the car up, brushing his bicep against my shoulder and pressing his chest against mine. My ass hit the wall before I realized I was backing away. My head screamed at the invasion of space, and I held my breath to contain it.
He extended his hand. “Christopher Desollador. A pleasure meeting you, Miss…?”
I never took my eyes off his. They were the color of aged Merlot. Damn. “Stacy,” I said.
The elevator doors opened. He leaned inside, punched the Lobby button for me, then held the door until I entered. I resisted the urge to press my back into the corner farthest from him. His mouth curled with mild humor. “Next time, you’ll have to tell me your real name.”
I hoped there would never be a next time. Barring that, I hoped if there was a next time, I would have another syringe between my breasts and a much bigger knife.