You are here: Home / Fiction / Science Fiction / Blitzball – A Clone of Hitler Rebels Against Nazis in Coming of Age by Barton Ludwig 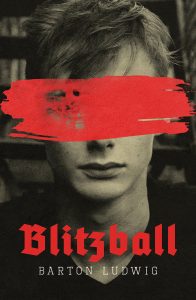 In a book that speaks out against racism, a clone of Hitler battles his genes at Reichfield High where soccer is literally war and the battle is fought between Neo-Nazis and Mexicans.

“The tone hits a range of notes between Suzanne Collins’ 2010 book, Mockingjay, and Mel Brooks’ 1967 film, The Producers.” – Kirkus Reviews

What Inspired You to Write Your Book?
Was inspired to write this book by the political situation in the world with fascism on the rise. It is quite scary what is going on in the world right now and how people are just letting it happen. I would hate to see a world where we progress or rather regress to 1930s Germany. This is what drove me to write this story as I wanted for a clone of Hitler to make better choices. If a clone of Hitler could make better choices, maybe there's hope for tomorrows youth that they won't go down such a racist and fascist path.

How Did You Come up With Your Characters?
I drew from my past experiences and different characters I encountered growing up. I approached Addie in a way where I didn't make him a parody. He was partially inspired by someone I knew in school who was bullied for being different and Addie is very different. He's a clone and not only is he a clone, he's a clone of Hitler to top it off. Instead of viewing Addie as evil because of his genes, I wanted to show that he has the potential to become good with each choice he makes. A person might start off as Mother Theresa and stay Mother Theresa. Has that person grew? No. Addie isn't perfect. In fact, he's far from it. Although the Addie of this book starts off as a racist, he progresses to something better. It wasn't natural or realistic to make him do a 180 but by the end of the book, without giving too much away, I wanted him to be a lot better than he started off and I think I accomplished that feat.