You are here: Home / Non-fiction / Binks: The Bizarre Account of Zachary Peter Jarrett 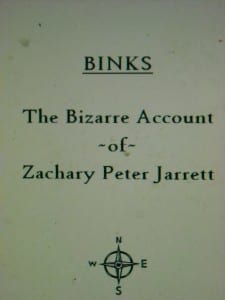 All my life it has been a dream of mine to have my work published, to write and through writing express myself. I am a 26 year old male from Charlottesville, Virginia and I suffer from Schizo-Affective Disorder and Scheuermann’s Kyphosis, a debilitating mental illness and painful spinal condition respectively. My life has been an interesting one indeed, and because of that I have put pen to page and written my memoir. The proposed title is “Binks: The Bizarre Account of Zachary Peter Jarrett”, and contained within its pages is both great tragedy and uplifting levity.

As hard as this is to admit, I am also a victim of childhood sexual abuse, and as a man it is particularly hard to come forward on such matters. Men are trained by society to be strong, to not cry or show emotion or weakness, and as such many men when victimized do not come forward. Statistically speaking you would think that women are abused more, but the numbers are deceiving for they only show reported cases, and because of the prevalent silence of male victims, they are skewed.

My book details the suffering and struggles a male victim undergoes throughout this tragic process, and how I overcame not only that, but my physical and mental conditions as well. It would serve as a great message to those out there who, like me, had their innocence stolen.

In the past I have excelled at poetry: I received an honorable mention in the 2001 Writers Eye contest, I was the winner of the 2004 Second Street Gallery Young Writers competition, I was published in the 21st edition of an anthology called the Poet’s Domain in 2005, and more recently, in 2009, I was a finalist in the First Amendment Writes poetry and songwriting competition in Charlottesville Virginia which aired on local television. Renowned author Rita Mae Brown presided over this contest as one of the judges and though she wasn’t present for the award ceremony she said of my poem in her notes that my entry, Syllabic Waffles, had “Real internal rhythm married to condensed venom”. My hope is that I have used the skills I’ve learned in poetry to be an effective writer of prose, specifically the memoir that I am putting before you.