You are here: Home / Fiction / Paranormal / Beyond the Eyes by Rebekkah Ford 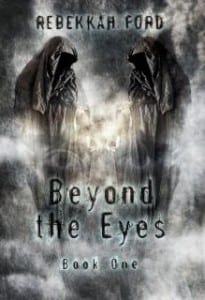 “Beyond the Eyes is haunting yet passionate. This breakout novel is quick and hip, a saucy must-read.”–Charles Land, Judas Pistol

Paige knows evil exists in this world, but she never imagined it would want something from her.

After a ghostly voice whispers a haunting message to seventeen-year-old Paige Reed, Paige’s life takes a nightmarish turn. Unwilling to tell her friends about the supernatural occurrences happening in her life, Paige feels more alone than ever–until she meets Nathan Caswell.

Nathan is not only hot, but seems to peer into Paige’s soul, evoking a magnetic energy between them that cannot be denied. But he’s no ordinary guy. He tracks dark spirits, and becomes alarmed when they set their sights on Paige.

And then there are the two power-hungry dark spirits who believe Paige can find King Solomon’s magical ring for them, because when her father was alive, he was close to finding it. If Paige doesn’t comply with their demands, they’ll kill her.

Paige is forced to dig deep into her father’s past and unearths shocking secrets about him and his bloodline. With the past and present colliding, Paige is only sure about two things in her life: she needs to outwit the dark spirits to stay alive, and she’s completely and helplessly in love with Nathan.

Author Bio:
Rebekkah Ford grew up in a family that dealt with the paranormal. Her parents’ Charles and Geri Wilhelm were the Directors of the UFO Investigators League in Fairfield, Ohio, back in the 1970s. They also investigated ghost hauntings and Bigfoot sightings in addition to UFO’s. Growing up in this type of environment and having the passion for writing is what drove Rebekkah at an early age to write stories dealing with the paranormal. At one point in her life, she thought she wanted to be a journalist, and although she enjoyed writing articles, she quickly discovered her real passion was writing fiction. Her fascination with the paranormal is what led her to write the ‘Beyond the Eyes’ series.