You are here: Home / Fiction / Beyond the Cracks by Bridget Straub 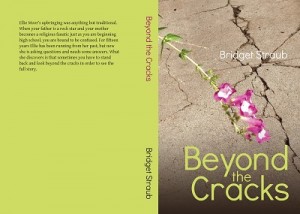 Everyone is defined by their past to one extent or another. For Ellie Moor the question is what really happened? When your father is a rock star and your mother becomes a religious fanatic just as you are beginning high school, you are bound to end up a little confused. For fifteen years Ellie has been running from her past, but now she is asking questions and looking for answers. What she discovers is that sometimes you have to stand back and look beyond the cracks in order to see the full story

What Inspired You to Write Your Book?
When I was a teenager I had a friend who hooked up with a guy in a band for a one night stand. The problem was that she was only fifteen at the time and when her parents found out the took the guy to court. He was from the Netherlands and swiftly deported, cutting his promising career short. I always wondered what happened to him.

How Did You Come up With Your Characters?
My characters just pop into my head. Although this book was inspired by a real event all of the characters are fictional and truly nothing like anyone I knew or know now.

Buy Beyond the Cracks On Amazon