You are here: Home / Fiction / Action & Adventure / Beyond Hades 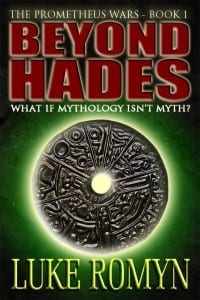 “This book is nonstop, relentless action… Just when you think a break is coming where you can breathe, it jumps right back into high gear.” — BookAddict

“Adrenaline is better than caffeine… Buckle up and hang on, because this is the best yet from Luke Romyn.” — Adina

What if mythology isn’t myth? The ancient Greeks told fabulously detailed stories involving unbelievable creatures – monsters dominating all tales from that time. Were they just highly imaginative, or was their inspiration from somewhere else?

Doctor Talbot Harrison, a professor in archeology, receives a phone call one day which will destroy everything he perceives as reality. His brother has been mysteriously killed and within moments the United States Military appear at his door, literally dragging him from his home. Thrown into a helicopter under intense armed guard, it doesn’t take long until they are attacked by something which cannot possibly exist, something drawn to destroy the one man who can stop the beasts from a land beyond Hades….

Luke Romyn spent many years, over seventeen in fact, working in the security industry. From door work in some of Australia’s roughest pubs and clubs to protecting Mickey Mouse and the Disney crew from the overzealous jaws of tenacious toddlers, Luke has worked throughout Australia and internationally in a vast array of roles. He’s done close protection for UK celebrities in Fiji and chased feral pigs and snakes out of the jungle film sets on Steven Spielberg’s and Tom Hank’s epic: The Pacific. There are few things Luke hasn’t seen. With all this experience behind him, it would be tempting to write a set of memoirs. Instead, Luke utilized it to fuel his own expansive imagination and began writing fiction. Initially starting with short stories, Luke rapidly progressed onto novels. His first book, THE DARK PATH, has been a Top 20 Bestselling Horror on Amazon and was also voted in the Top Ten Horror novels of 2009. BLACKLISTED, his second novel, saw his writing divert slightly away into the action-thriller genre while his third, BEYOND HADES, sees the world plunged into a horror unleashed from mythology from which only one man can save us… if he stays alive long enough.