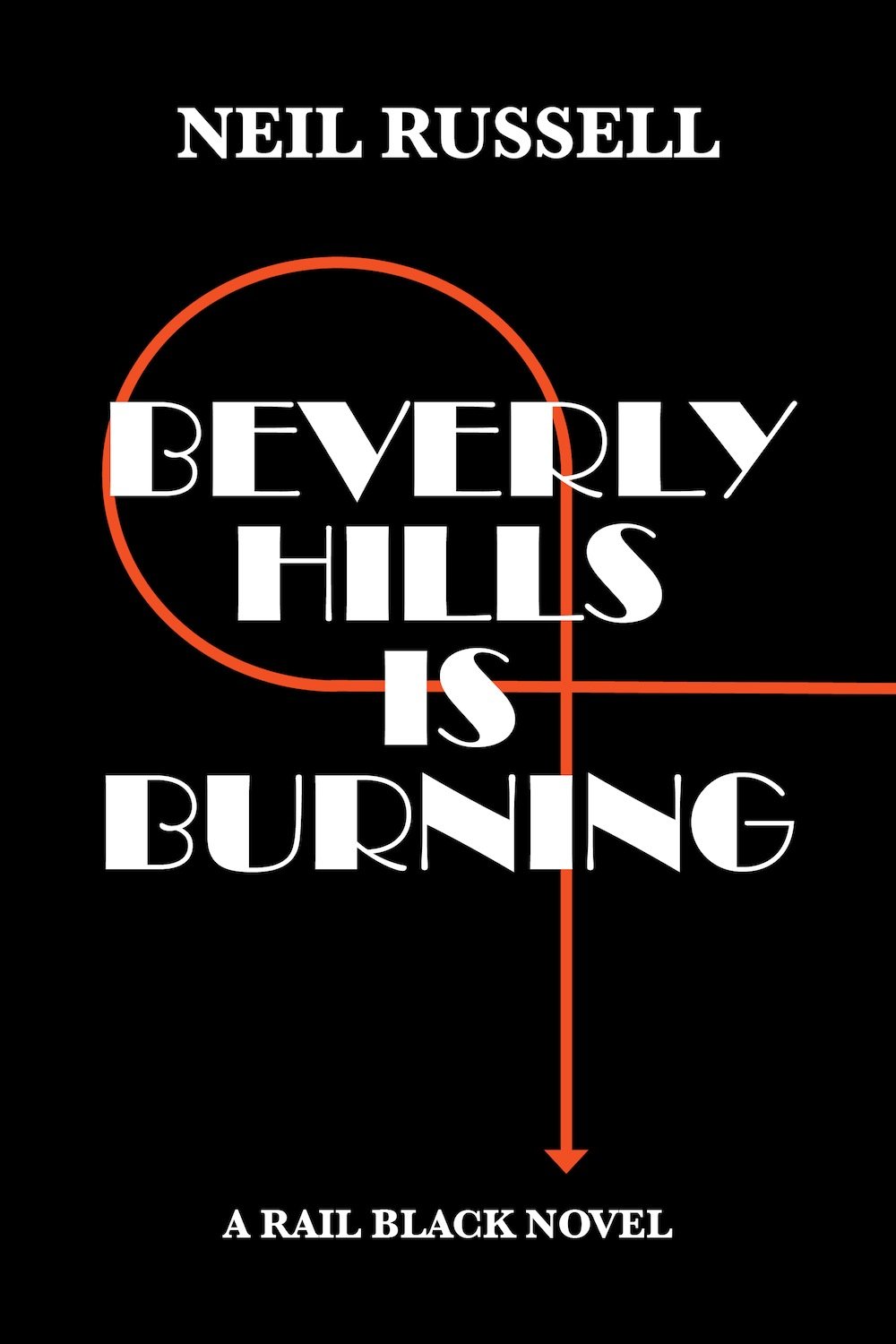 “It was just after midnight when the girl in the blue diamond necklace fell out of the sky.”

In Hollywood, an ex-con movie producer, fresh out of San Quentin, is lucky if he can get a valet to take his car at the Ivy. Teddy Chessman got his own studio.

Why? Because Teddy controls the most important motion picture property to hit town since agents were invented. And attached to this expected critical and financial bonanza is the biggest female action star in the world, Valentine Jones.

But good plans die horrible deaths, and foolproof ones, worse. And now, the guy who loaned Teddy the money to buy the joint–Rail Black, a former Delta Force operator with a private fortune–is forced to take possession of Teddy’s dream. And the bad news is just beginning.

Exploding from ninety years in the past–when gangsters and movie tycoons roamed Hollywood and scratched each other’s wallets–Rail is sucked into a quicksand of unsettled scores, duplicity and death, where a couple of billion dollars in boxoffice seems like small change.

From Southern California to New York, Venice, Havana, Mexico and Cyprus, Rail must disentangle the past from the present and come to terms with his feelings for Barrie Fontaine, a long dead woman–and extraordinarily brave pilot–he has never met.

And somewhere, out there, is Matty Aspirins, a hitman on a mission all his own.

Welcome to Beverly Hills is Burning.

There will be no intermission.

What Inspired You to Write Your Book?
BEVERLY HILLS IS BURNING is the third novel in the Rail Black novel series that I’ve written. In the previous two, CITY OF WAR and WILDCASE, there are a few elements pertaining to Hollywood because Rail lives in Beverly Hills where show business and its trappings are inescapable. But because of my background and career, I wanted to bring Hollywood to the fore and show its history and its inner workings both past and present because it has not changed too much over the years as a business. I used a fictional historical device to do so and BEVERLY HILLS IS BURNING is the final product.

How Did You Come up With Your Characters?
I actually had Rail Black as a character in another project that I was working on as a screenplay. But after several iterations, I decided that there was so much more to him that he merited a novel. My publisher at the time then wanted a series and now I have self-published the third, with a fourth on its way. The surrounding characters are based off of people I have had the pleasure (or displeasure) of knowing throughout my life.

About the Author:
Neil Russell is the founder and president of Site 85 Productions, Inc. which creates, acquires and licenses intellectual properties for exploitation across all entertainment media. Site 85 also produces motion pictures, television and music and has begun publishing books through its Rothington House imprint. Over the course of his career, Neil has acquired the rights to hundreds of books, screenplays, short stories, formats, life stories, titles, trademarks and pitches.

Born into a theatre-owning family, Neil began his career in theatres then joined Paramount Pictures and later, Columbia, in theatrical distribution where he was privileged to handle some of the highest grossing and most critically-acclaimed motion pictures of the time, including THE GODFATHER I and II, CHINATOWN, SERPICO, DEATH WISH, SATURDAY NIGHT FEVER and THE WAY WE WERE. Recruited by MGM in New York just prior to their acquisition of United Artists, he was charged with merging then heading the combined companies’ television distribution units. During his tenure at MGM/UA, he oversaw the sales, advertising partnerships and extended rights exploitation of the largest film library in the world—more than 4000 titles—including the 700 Warner Brothers Pre-1948 pictures: CASABLANCA, THE AFRICAN QUEEN; the 717 Pre-1948 RKO pictures: CITIZEN KANE, KING KONG, IT’S WONDERFUL LIFE; the MGM library: GONE WITH THE WIND, THE WIZARD OF OZ, BEN-HUR; the United Artists library: THE PINK PANTHER franchise, the JAMES BOND franchise, the ROCKY franchise, MIDNIGHT COWBOY, APOCALYPSE NOW and more than 100 television series. He also worked closely with MGM/UA’s bankers to maintain the company’s lines of credit.

Following an unsuccessful attempt in conjunction with a Wall Street investment bank to acquire a portion of MGM/UA’s film library and other underutilized assets, he joined the Taffner Company, producer and distributor of the hit ABC sitcoms, THREE’S COMPANY and TOO CLOSE FOR COMFORT, and distributor of the export product of UK’s Thames Television. At Taffner, Neil helped oversee all of the company’s business and shepherded one of television’s first advertising barter networks to keep TOO CLOSE FOR COMFORT on the air following its cancellation by ABC, thereby generating an additional $50 million in revenue for the company.

Backed by private investors, Neil left Taffner to form Horizon Entertainment where he acquired the rights to forty game show formats from Nicholson-Muir Productions, creators of THE NEWLYWED GAME. He then merged Horizon with Orbis Communications, a financing and distribution company whose primary client was Procter & Gamble, and returned to Los Angeles to head Orbis’ West Coast operations.

Neil helped effect Orbis’ subsequent acquisition by Carolco Pictures, producers of FIRST BLOOD and RAMBO II, and joined Carolco as Executive Vice President. In the ensuing years, Carolco became one of the era’s most successful global entertainment companies, producing dozens of major motion pictures, including TOTAL RECALL, RED HEAT, RAMBO III, TERMINATOR II and BASIC INSTINCT. Neil was involved in all aspects of the company’s business and acquired more than 100 motion pictures and their extended rights packages, including TERMINATOR, PLATOON and THE LAST EMPEROR. He also helped acquire more than a dozen companies for Carolco, including the DeLaurentiis Entertainment Group, the Vista Organization and the Wilmington Studios in North Carolina.

In 2010, Neil entered into an agreement with HarperCollins to publish a series of international action/thrillers based on an original character he created—Rail Black. The first Rail Black novel, CITY OF WAR, was released in March of that year, and its sequel, WILDCASE, in 2011. The third in the series, BEVERLY HILLS IS BURNING, was self-published in 2014. Five more are slated.

A two-time cancer survivor, Neil wrote the book, CAN I STILL KISS YOU?: ANSWERING YOUR CHILDREN’S QUESTIONS ABOUT CANCER. The book was published by HCI, publisher of the CHICKEN SOUP FOR THE SOUL series, and is used around the world by doctors, hospitals and cancer centers, including Sloan-Kettering and St. Jude, in their counseling of families with cancer.

A full bio is available at: http://neil-russell.com/bio.html