You are here: Home / Bargains and Freebies / Bargain Books Under $3 / Being Richard by Toni Allen 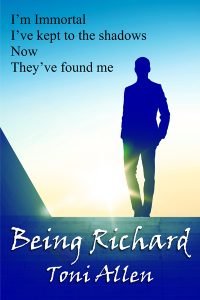 Being Richard by Toni Allen

Being immortal has never been easy.
Some people are born immortal – some are made immortal.
Towards the edge of Surrey, near the Hampshire border, lies the rural village of Elstead. If you follow the River Wey westwards you’ll arrive at Thundry Meadows, an ancient sacred site dedicated to the god Thor. It’s a place of beauty and mystery, where the river runs clean and owls hoot in the night. Over two and a half thousand years ago a man was born there, Sunbeerka, son of the swamp lord; bred to be sacrificed to Thor if the tribe was ever in danger, his destiny to give his life for the sake of his people. Some spirits refuse to die, and Sunbeerka lives on, quietly, near his birth place in Elstead.

He isn’t lonely, but being immortal has its downfalls. The recurrence of loss, the memories, and the continual need for a new identity before everyone questions why he looks so young. From the start he knew that Richard Ridley didn’t feel safe; dying in infancy, and apparently unloved. He has no intention of being Richard. But then a man turns up claiming to be from the Special Investigation Department; and he’s forced to take on Richard’s identity, or be locked up – forever. All the department wants is for him to help them find other immortals – or do they?

He’s terrified at having his life controlled by others, but can’t rest until he’s discovered why Richard’s short life upsets him so much. Defying the department’s instructions, he sets about investigating his history. Uncovering Richard’s past proves dangerous, even for an immortal.

What Inspired You to Write Your Book?
I read in the local newspaper that ancient artefacts dating back over two thousand years had been found in the silt at the bottom of the River Wey near a local beauty spot Thundry Meadows. The area around Thundry Meadows is a known ancient sacred site, dedicated to the god Thor, with many place names, such as Thursley, referring back to the god of thunder. For many months I visited and researched the location, all the time imagining what it would have been like to live there two thousand years ago, and making notes on how the landscape had changed. I didn’t particularly have a story in mind when I started, yet my imagination gave me a constant companion, a young man of thirty who’d been born at Thundry Meadows, the son of a tribal chief. This man didn’t want to leave his sacred ground, and he kept talking to me as if he were still alive – so I decided that he was, and made him immortal.

How Did You Come up With Your Characters?
During my walks around Thundry Meadows my imagination gave me a companion, a young man of thirty who’d lived there over two thousand years ago. At times I wondered if this handsome son of a tribal leader was in fact a spirit and not my imagination at all, because at time he felt very real to me. He told me his life story, and of how the landscape had changed, yet he never appeared to have ventured very far from his native sacred site. It was as if he lingered and refused to give up his birthright.

I wondered what such a man would make of life today, and how he’d cope in the modern world. The more I thought about him, the more compelled I felt to tell his story, seeing him as an immortal, born two thousand years ago yet still living today. All he needed was to take on someone else’s identity, to ensure he existed on the system for things like tax and a driving license, and that’s when I realised that being Richard was never going to be easy for him.