You are here: Home / Children and Young Adult Books / Before Life Happened by Isabel Curtis 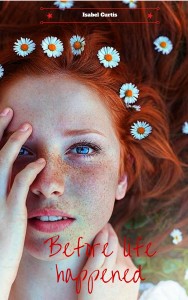 When sixteen-year-old Hayden Wilson recovers from the hospital, her world is upside-down. Her parents are dead, and her three older brothers are all she’s got left. But times are difficult, and staying strong is even harder.
Wrong friendships and wrong choices will lead her to a path of self-destruction, a one way ticket to downfall.
But at some point, Hayden has to learn how to deal with life. Putting the pieces back together and growing up.

Because it’s OK to want to go back to before, but it’s also OK to learn how to move on.

Before life happened is a coming-of-age novel that will bring you into a teenager’s world of grief and despair, and her journey back home. But will she be able to find her way?

What Inspired You to Write Your Book?
“Before Life Happened” is a story about grief and loss, and it shows the main character’s inability to cope with her pain. I’m sure many of us have suffered a terrible loss, and I wanted to show readers how deep one’s downfall can be if you are not strong enough, but at the same time show that there can be hope for a better future. Many teenagers go through hard times and most of the time they feel lost and insecure and unable to imagine a happy life: I want to give my readers the message that life is worth living, despite it’s ups and downs, and that grief can be battled one day at a time.

How Did You Come up With Your Characters?
Coming up with my main characters wasn’t hard, they sort of just popped into my mind, while some secondary characters just came to life as I was writing the story. Right from the start I knew what type of protagonist I needed, what type of antagonists the story needed in order to move forward and I knew what type of character could give the right plot twist to my novel – in the end they all fit perfectly with one another!

Book Sample
It was pretty early when Hayden Wilson woke up that morning, and yet it seemed like everyone in the house was already alive, I mean awake.

So, everyone was awake.

But she still didn’t feel like getting up and facing another day. Plus, her body was still hurting from the accident, so the less she moved the better. Well, it was a plausible pretext anyway, so that’s what she told everyone. We even need good excuses for staying in bed all day; go figure.
She spent the next half an hour just staring into the emptiness above.
Staring at the ceiling is very engaging, especially when your mind is so messed up. And it had been her favorite hobby for the past month: I guess that’s what you do when you’ve got to shut the world out.
Then someone knocked on her door, interrupting her inactivity. How rude.
“Hayden?” It was James, her oldest brother. “You awake?”
“No.”
He sighed. Everything was already too hard, she made it all worse. He opened the door anyway and walked inside her small room.
“I’m sleeping. Can’t you see?”
“Not really,” he said, while opening the shutters and letting the sunlight invade the room.
“Oh come on! What’s your problem?” she said, hiding her face under the blankets.
“Mrs Selling’s here. We gotta talk.”
“I don’t wanna see Cruella de Vil.”
“Cut it out, will ya?” he said, moving the blankets to the side. “Come on, I’ll help you get up.”

Standing up was hard and painful, but not as much as living had become, so she didn’t whine about it. Sometimes, no matter what you are going through, complaining just feels totally unrighteous. She was alive after all. I mean, awake. Better than dead, perhaps.
“Please, kiddo, be nice to her,” he said while handing her the crutches. “We need her on our side.”
“Yeah, I know,” Hayden said, walking out of the room followed by James.
They headed towards the living room, where Mrs Selling was waiting for them. The house wasn’t big at all, but it took Hayden a while to get there, whether because of the crutches or the lack of desire to face the social worker, we’ll never know.
She entered the room, where her two other older brothers were busy in what sounded like the usual meaningless conversation that people engage in just to fill the silence.
“It’s pretty cold outside, uh?” Mike was saying.
“Yes! Unbearable… oh there you are, Hayden!” Mrs Selling got up to greet her in a very polite manner, but Hayden knew better than that: she wasn’t going to let Cruella fool her. We all know that even if someone acts nicely it does not mean someone is nice. We are all walking masks.
“Hello, Mrs Selling,” Hayden said, as she slowly sat down at the table.
“How are you doing today?” Mrs Selling asked, resuming her seat.
“I’m fine. Thank you.”
I don’t know if politeness equals fakeness, but they surely coexist ninety percent of the time.
“OK, uhm, great,” she said while taking some papers out from her briefcase. “There are some things we need to discuss all together.”
“I’m assuming it’s about Hayden’s custody?” Will was always the obvious one.
“Yes, correct,” she replied politely, or falsely if you prefer, still looking through some documents.
“I thought we already solved this issue,” said James.
“Yes, we did, James, and do not worry: I have not had any second thoughts. Hayden will stay under your custody for now.”
“For now?”
“Yes, Hayden.” She turned to look at her. “This is a temporary solution. It is up to you to make it permanent. That’s why I’ve asked to talk to you too, today.”
“I’m listening,” Hayden said.
This conversation was not starting well.
“Hayden, I know you are going through a hard time right now but you need to be aware that harder times will come.”
Making someone feel better was definitely not her talent.
“…And you have to be strong. You have to do it for yourself, and for your brothers. It would be such a shame to separate the four of you.” She paused, probably waiting for her words to sink in.
“What do I have to do?” Hayden asked.
“Well, first of all: don’t get in trouble. Things are pretty tough around here and I don’t want to see you doing anything stupid; that would go also for your brothers, but they are not underage so I can’t force them to do anything. Although I am assuming they will be perfect role models for you.” She looked at them intensely before moving on. I guess she knew about their criminal records. Nothing big, but still.
“I have no intention of getting in trouble.”
“I’m sure you don’t. But sometimes trouble comes knocking at the door.”
“I won’t open it.” It seemed like the right answer to Hayden, until she saw Mrs Selling’s awkward smile.
“Next thing: keep up the good grades. School is important.”
“Yes, I know.”
“You could get a scholarship and maybe go to college one day.” She said this with a bit too much excitement, so now the awkward smiles were of the opposite party.
“Right.” Thinking about the future was just something Hayden had no intention of doing right now. Getting by each day is already challenging enough, especially when you are stuck in the past.
“Hayden.” Mrs Selling was looking at her, and she sounded even more serious now. “Do you feel like you need a psychiatrist?”
“We can’t afford one.”
“That’s not what I asked,” Mrs Selling said, “I asked you if you think you need one.”
Have you ever heard someone say, ‘I need a psychiatrist’, or a crazy person admit he’s mad? No one admits to needing help. It’s just how it goes.
So obviously she said, “No, I’m fine.”
And obviously, they believed her.
“OK, great. I think we’ve covered everything,” Mrs Selling said while handing some papers to James and Hayden. “I need you both to sign these forms, so we can make the custody official.” Hayden signed without even reading the papers. This meeting had to be over soon.
James read quickly through the documents, probably pretending to understand the terms, but not really grasping the full meaning behind that responsibility.

Guardian/noun
1) a person who protects or defends something;
2) one who has the care of the person or property of another.

How are you supposed to teach a teenager all there is to know about life, when you are still learning too?
He was not sure he could do it, but he was sure it was the right thing to do. And he was going to try his best. It was his little sister after all, he couldn’t just give up on her.
He signed.
He was twenty-seven and had just become the legal guardian of a sixteen-year-old girl.

Losing their parents had changed everything. But it wasn’t the end, it was just the beginning of something new. Whether the future was going to be good or bad, it was totally up to them.