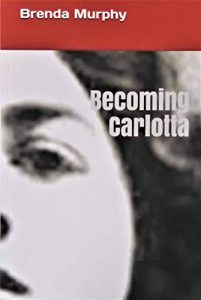 Hazel Tharsing was born in California in 1888. Intensely shy, she learned to meet the world as the glamorous actress Carlotta Monterey, by far the greatest acting role of her twenty-year career. Counted among the most beautiful women in America, she married a British aristocrat in London, then the twenty-year-old son of her mother’s lover in San Francisco, then a famous artist in New York, and finally America’s greatest playwright, Eugene O’Neill, in Paris.

This novel about her life is an imagined narrative built on a base of facts with the goal of understanding Hazel Tharsing and what it meant for her to live her fascinating life as Carlotta Monterey. It takes us to the cities and the back country of the Old West, to Edwardian London and an English country-house life reminiscent of Downton Abbey’s, to the Broadway theater in its golden age and the tough reality of the actor’s life on the road, and to bohemian Greenwich Village and Manhattan’s arty Smart Set in the 1920s. Through it all, Carlotta is an outsized presence, inventing endless new faces to meet the challenges that life throws her way and turning from every defeat and disillusionment to look ahead with newfound energy and determination.

What Inspired You to Write Your Book?
I came to Carlotta Monterey through her fourth husband, the playwright Eugene O'Neill. For people who are interested in O'Neill, Carlotta is either the "keeper of the flame" who revived his reputation after he died by having his masterpiece Long Day's Journey Into Night produced or the dragon lady who kept him in isolation from his old friends during the last 20 years of his life. I was interested in what made her who she was, in the 40 years before she married O'Neill. Writing this book helped me to understand the greatly flawed but extraordinary woman who came from such unlikely beginnings and willed herself to matter in the world.

How Did You Come up With Your Characters?
This is a biographical novel built on fact. All of the "public" things in the novel, such as births, marriages, deaths, addresses, employment, etc. are factual, while "private " events like conversations and thoughts are invented. Most of the characters in the novel are based on the real people in Carlotta's life, but reimagined in relation to the story of her life that is being told.