You are here: Home / Non-fiction / Because I Said So: Life in the Mom Zone by Annie Oeth @annie0 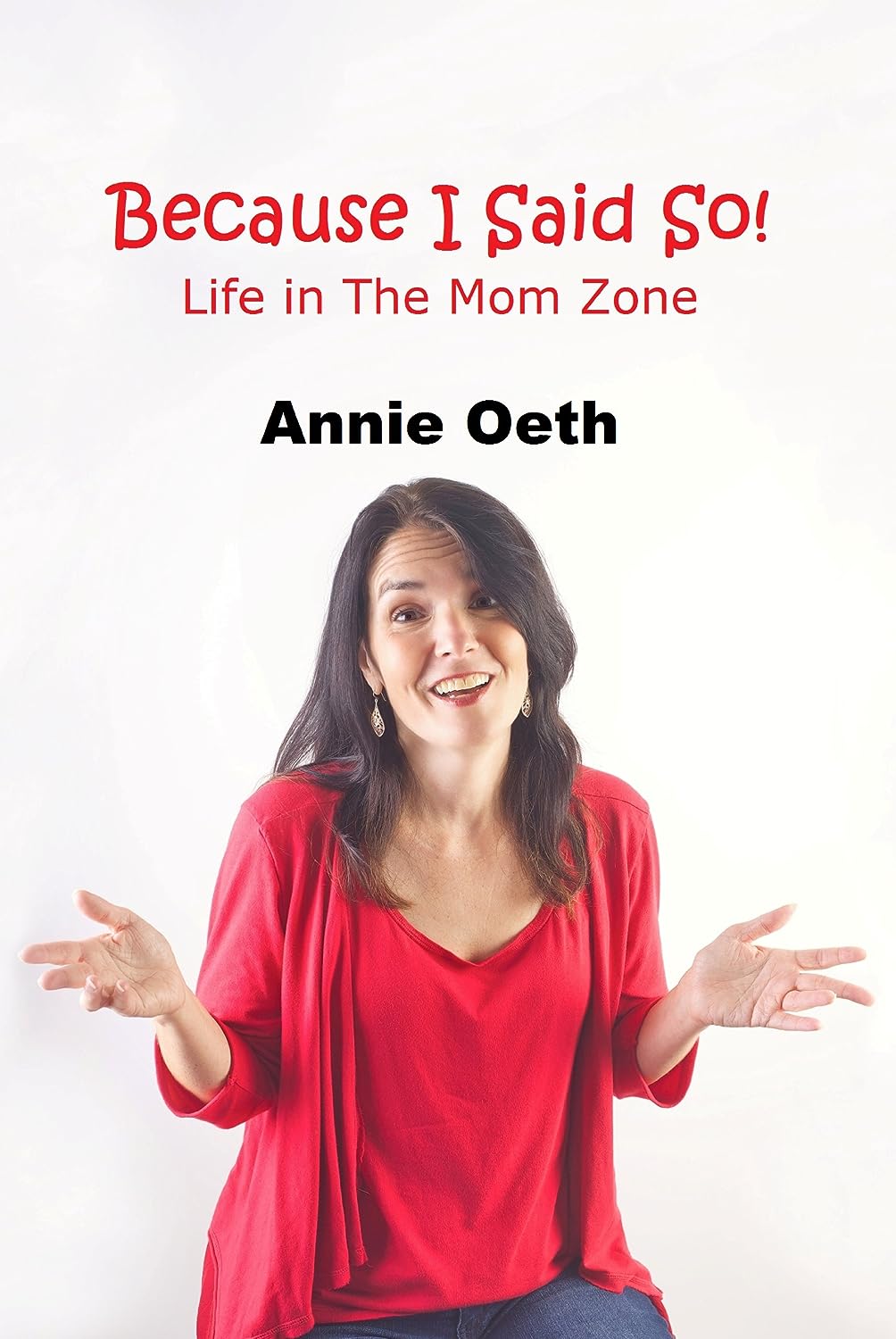 “Because I said so.”

It’s the answer that rolls off the tongues of mamas from all over. In Because I Said So: Life In The Mom Zone, veteran mama Annie Oeth tells of the worries, laughter and sheer terror of being a mother.

Trips to the emergency room, college graduations and the dangerous combination of teenagers and fireworks are all fair game in this romp through southern motherhood. Spilling the (jelly)beans on Easter egg hunts, Santa Claus and frogs in mailboxes, Annie Oeth writes of life, love and raising children while hanging on to her sense of humor.

From stories of laughter to tales of tears shed, she remembers her own growing-up years in small-town Mississippi, her parents’ 44-year romance and her own children’s travels on their way to adulthood, crafting stories that will touch hearts and funny bones.

Anyone who’s ever rocked a baby, worried over a teenager or seen family game night degenerate into a knock-down, drag-out can relate to these life lessons, straight from The Mom Zone.

Mamas are tender-hearted, but don’t mistake their kindness for an absence of backbone. In these stories, the love, strength, humor and super powers of mothers are hailed for the wonders that they are. Whether you’re a mama to sons who have an affection for reptiles and bottle rockets or a daughter who thinks you’re wrong just when you’ve figured out your own mother was right, you’ll love yourself, your kids and your life more after this read.

“Because I Said So.”

What Inspired You to Write Your Book?
The inspiration for writing “Because I Said So: Life in The Mom Zone” was partially writing The Mom Zone blog for The Clarion-Ledger, the daily newspaper in Jackson, Mississippi, and partially living my life. You can’t bring up four children without having some tales to tell. “Because I Said So” tells quite a few of them, some sweet, some funny, some sad, but all of them heartfelt.

How Did You Come up With Your Characters?
The stories are mostly about my family.

There was a time of retribution like no other in my growing-up years. It was when church let out.

At no other time in no other day did more children get more beatings, spankings, whippings and whatnot than after church.

Now let me preface this by saying our parents were not the “spare the rod” types. If you loved your children, the thinking back then was you would get to the seat of the problem. Rapidly. There were no time-outs back then. We kids would have loved those.

I am not an advocate of spanking children because I think there are more effective ways of communicating right and wrong than hitting. That sentence would have been laughed off the street in the South circa the early 1970s, though. And if one was to call one of those hiney-warmings child abuse, then I guess a whole town’s worth of parents would have been locked up.

No, we kids all wound up being worn out at one time or another. It was only a question of when and where.

Usually, most waylayings happened once the 15th go-round of “Just as I am’’ was played and a couple of people rededicated their lives to Christ. The handshakings and greetings would begin as folks made their way to their cars in an effort to beat the Methodists to the Sunday buffet at the Southern Inn.

We kids would be walking out of the church together, and sure enough, some other child would be screaming in the parking lot. Probably several. It was the topic of discussion for us—who was getting a beating and what they did in church to deserve it.

Church misbehavior would get you a warm behind faster than setting fire to the school back then. It was a reflection on your parents‘ child-rearing in the public-est place in town. You didn’t challenge authority too much more than acting like a heathen in church. It was like asking for the physical motivation to stand awhile.

We would witness someone wearing out their young’uns‘ backsides beside the family‘s Chevy Malibu and be thankful that our own badness, doodling, whispering and note-passing didn’t cross the line that Sunday.

Our badness continued, though, not unlike a game of Russian roulette. We’d keep talking during the preacher’s sermon, never knowing when the bullet of getting a backseat beating had our names on it.

Of course, we all grew up, and many of us kept the habit of going to church. We had even learned to behave by the time we had children of our own. And this is when I learned the lesson my parents and all my friends‘ parents knew: Never commence to punishing your child during the sermon.

The oldest boy was somewhere between two and three at the time and was bored out of his little mind. To occupy his time, he picked up the Methodist hymnal and began flipping all gazillion pages from hard front cover to hard back cover.

It was like the tide, steady and relentless, and also pretty darned loud. I started getting disapproving looks from my fellow congregants.

In desperation, I folded my arms and gave him a pinch, surreptitiously, to get his attention.

Instead, he got mine. Along with the preacher’s and everyone else in the congregation that day.

The preacher had to pause to get his composure back, shaking while he stifled a laugh, and the choir twittered with muffled laughter until the altar call.

The rest of the week, folks around town would tell me to stop pinching my little boy and laugh. That was the last time he got pinched by me, in church or elsewhere, by the way.

The oldest boy was lucky he was a child of his generation. In the church parking lots of my day, that would have gotten him a walloping of Biblical proportions.

About the Author:
A small-town Mississippi girl grows up, snatches a magnolia during her college graduation, and sets out to be a writer, newspaper editor and mama. Annie Oeth has done all three—and lived to tell the tale. A native of West Point, Mississippi, Oeth began writing from her front porch swing when she wasn’t climbing trees and drawing. She is a graduate of Mississippi University for Women, embarking on a journalism career and motherhood soon after. In 1996, she moved from Mississippi’s smallest daily newspaper, The Daily Times Leader in West Point, to the state’s largest, The Clarion-Ledger, in Jackson. Starting as an assistant metro editor, Oeth moved to editing a family of nondaily publications before returning to the daily product as features editor in 2012. She’s been writing about family and fun for The Clarion-Ledger and in The Mom Zone blog ever since. She lives in Ridgeland, Mississippi.

Links to Purchase eBooks
Link To Buy Because I Said So: Life in the Mom Zone On Amazon