You are here: Home / Fiction / Historical / Beauty & Grace, A Historical Novel by Christina M. Abt 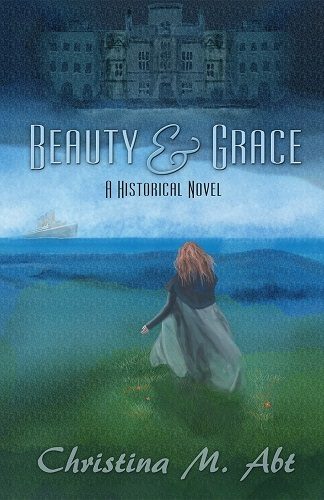 Beauty & Grace is an intensely moving work of historical fiction telling the stories of Teagan Cormick and Grace Reid, women from different worlds and different eras, brought together within the haunting confines of Midland’s Wood Haven asylum.
Teagan leads readers through her early life in Queenstown, County Cork, through to her youthful immigration to America and her chilling, involuntary commitment to Wood Haven following The Crash of 1929.
Grace arrives at Wood Haven in 1978, hired as a consultant to deinstitutionalize the ten remaining patients trapped for decades within the asylum walls and to deal with Midland citizens determined to prevent “asylum people” from moving into their community.
Together, Teagan and Grace lead Wood Haven patients from the dark past into new lives, in the process telling stories and sharing memories that form a lasting imprint in reader’s hearts.

Targeted Age Group:: 15 and Up

What Inspired You to Write Your Book?
Beauty & Grace is a work of historical fiction based on a story told to me by Mary Jo Hodge,M.S., D.P.A. Mary Jo was a NYS Certified Treatment Team Leader of Nurses in the 1960's and 70's.
At one of the asylums that Mary Jo supervised, she oversaw nurses caring for immigrant women. Some of these women had been locked away for as long as 50 years, for one simple reason. When they came to America they were unmarried and they were not meeting a man to marry upon their arrival.
Due to those facts American Immigration Officials often considered them to be financial liabilities. Rather than allow them entry to the United States they would order the women to be institutionalized on the spot, despite the fact that they were of sound mind and body.
From the moment I heard Mary Jo's story I was driven to write about it. That drive led to me to two years of research and writing, which expanded the scope of my work to a much broader stage of the unimaginable reasons why people in early-to-mid 20th Century America were committed, and the heinous treatments they received behind asylum walls.

How Did You Come up With Your Characters?
I created fifteen characters in Beauty & Grace that were institutionalized between the years of 1920 through 1940.

I began the process by researching reasons why people were institutionalized. From there I decided if the character was a man or a woman, their nationality and what year they were institutionalized.
With those details in place, I would search for popular first names of a man or woman from the chosen nation and year. Once I found a first name, I would make up a last name to match.
From there I decided if the individual was going to live or die in the 50-year time span of the book and then I began asking myself questions about the individual and crafting the story of their life.