You are here: Home / Bargains and Freebies / Bargain Books Under $3 / Bargaining With The Billionaire Bodyguard by Lisa Weaver 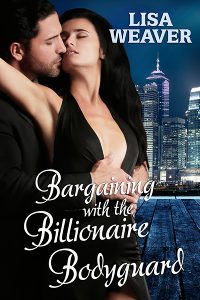 Bargaining With The Billionaire Bodyguard by Lisa Weaver

Having miraculously survived the bombing that blasted his private jet out of the sky, billionaire Donovan White has dedicated his life to the pursuit of justice. Now a covert operative for the Sentinels Agency, he is closing in on the man responsible for the crash. When his mission is nearly botched by a spunky reporter with a score of her own to settle, he reluctantly strikes a bargain with the one woman who just might be capable of decimating his love proof armor.
Reporter Madison Tremaine will do anything to nab the exclusive she must write to secure the promotion she desperately needs—even if it means bargaining with a devilish billionaire. Once burned, twice shy, she has serious reservations about partnering with Donovan, but there’s more than a career upgrade at stake. Her ability to unearth the truth surrounding a newly discovered family secret hinges on the sexy billionaire.
When their quests collide, will their dangerous deal lead to love or will it cost them more than either of them bargained for?

What Inspired You to Write Your Book?
When fans of the Secret Sentinels series began contacting me asking for Donovan's story, I knew I had to spend some time getting to know the sexy covert operative better so I could hook him up with a happily ever after of his own.

How Did You Come up With Your Characters?
The characters really take shape on their own as I write. I've learned the hard way not to try and change who they are as I type. It's better to just go with the flow.

Book Sample
Noticing his interested perusal of the beauty, the bartender quirked an eyebrow in masculine solidarity. “Not hard on the eyes, is she?”
“That she’s not.”
“Why don’t you do yourself a favor and buy her a drink?”
It was a shame he didn’t have time for such a pleasant distraction at the moment. If he did, he wouldn’t need the bartender’s urgings to connect with the woman.
“I would if I wasn’t here on business,” he replied. “I’m waiting to meet with Alan Sonetti.”
“Business, huh? Too bad.” Rubbing the teak countertop with his polishing cloth, the bartender paused mid-swipe and regarded him intently.
Donovan saw the exact moment recognition dawned.
“Say, you’re Donovan White, aren’t you?”
Nodding, Donovan took a swallow of his drink in preparation for the volley of questions he knew would inevitably follow.
“It was a miracle you made it off that jungle island alive. I imagine it couldn’t have been easy being stranded in the middle of nowhere, not knowing if or when you’d be rescued.”
“It wasn’t. It’s an experience I don’t like to rehash.” A half-hearted smile took the bite out of his response.
Not at all dissuaded, the bartender ploughed on. “A shame about that actress you were dating. Tragic that she didn’t survive the plane crash.”
“Yes,” he agreed, taking another drink in hopes of anesthetizing the sharp sting of guilt. But the bite of the brandy couldn’t dispel the painful memories, and the world’s supply of alcohol wouldn’t ease his crushing despair over what had happened in the aftermath of the accident. Nothing could.
Leaving the bartender’s curiosity unquenched, he steered the conversation back to the topic at hand. “The woman…is she a regular?”
“First time I’ve seen her. A lot of purebred peacocks gather here, but this one is a ray of sunshine. I just wish she wasn’t here poking around looking for trouble.”
“Trouble?”
“She was asking about Mr. Sonetti, earlier. Not to disrespect the boss, but nothing good ever comes of that. Beautiful women are in here all the time, hoping to catch a glimpse of him. He’s got that RHS factor, you know? Rich. Handsome. Single. On the rare occasions one of them is lucky enough to find him, they inevitably throw themselves at him hoping he’ll fall for them. He doesn’t throw them back—just uses them until he tires of them. The relationships all end the same, and it’s not with him putting a ring on their finger.”
Donovan raised an eyebrow at the man’s candor. “I see. Well, I’ll be keeping your boss tied up with business for a bit. Maybe she’ll get tired of waiting.”
For her sake, he hoped she did. Alan Sonetti was into shady up to his neck, and he’d hate to see her get mixed up with the man. If the bartender was right, and the dark-haired beauty was on a hunting expedition to bag Sonetti, odds were good she had no idea she was tracking dangerous game.

Links to Purchase eBook version – Click links for book samples, reviews and to purchase
Is your book in Kindle Unlimited? Yes