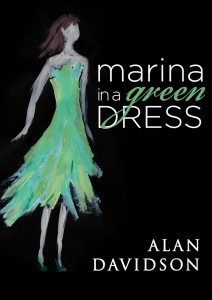 New to London, Jessica is obsessed with the hit musical MARINA and its charismatic star – Kennedy Orr. It’s a welcome escape from her dreary bedsit, her dull boy friend Steve and her boring job with a scary woman boss. She loves the show so much that she’s seen it more times than she cares to admit, even though it ends in a beautiful death.

One day she pours out all her feelings in a long letter to the star and tells him the story of her life. She has no intention of posting it but Steve has other ideas, wanting to teach Jessica lesson. He’s certain that she’ll never get a meaningful reply….but he’s wrong. Even more surprising, Kennedy Orr decides to meet Jessica for reasons of his own. So begins a very strange relationship in which the lines between fantasy and reality become increasingly blurred. Soon Jessica is revelling in an entirely new and much more glamorous life but Steve is convinced that she’s sleepwalking into serious danger….
An enthralling and unusual suspense novel by the author of THE BEWITCHING OF ALISON ALLBRIGHT that will grip readers right through to its unexpected ending.

Link To Buy Marina in a Green Dress on Amazon