You are here: Home / Children and Young Adult Books / Bandits 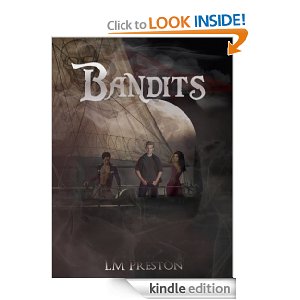 Daniel’s father has gotten himself killed and left another mess for Daniel to clean up. To save his world from destruction, he must fight off his father’s killers while discovering a way to save his world. He wants to go it alone, but his cousin and his best friend’s sister, Jade insists on tagging along. Jade is off limits to him, but she insists on changing his mind. He hasn’t decided if loving her is worth the beating he’ll get from her brother in order to have her. Retrieving the treasure is his only choice. But in order to get it, Daniel must choose to either walk in his father’s footsteps or to re-invent himself into the one to save his world.

LM. Preston, author of The Pack and Explorer X – Alpha, attended college at Bowie State University, and worked in the IT field as a techie and educator for over sixteen years. Her first published novel, Explorer X – Alpha, was the beginning of her obsessive desire to write and create stories of young people who overcome unbelievable odds. She loves to write while on the porch watching her kids play or when she is traveling, which is another passion that encouraged her writing.