You are here: Home / Fiction / Paranormal / Bait by K.C. Blake 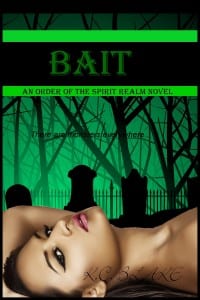 At sixteen, Bay-Lee is not your typical girl. The last thing she wants is to be popular, to be noticed, so she never raises her hand in class. She doesn’t participate in extra-curricular activities and purposely puts the wrong answers on tests in order to keep her solid C point average. Her classmates have no clue who she really is, Van Helsing’s daughter. They don’t know she’s on the run, hiding from monsters that want to kill her before she can turn into a great hunter. They’re afraid of her… and they should be because she plans to be the best hunter the world has ever seen. As soon as she is finished with her training, she’s going to track and kill the werewolf pack responsible for tearing her mother to shreds, and nothing is going to get in her way.

At twenty, Nick is a rock star slash vampire hunter, personally trained by Van Helsing. He was unofficially adopted by the man and lives in his castle when not touring with his band, Bad-Rock. Years ago his fate was sealed by a fortune teller. She shouted a prophecy for everyone (including his parents) to hear, a prophecy that has haunted him to this day. Even his closest friends wonder if it could be true. Will he become evil and open the doorway to the Spirit Realm, allowing monsters to kill off the human race?

They both want love…

Bay-Lee thinks the last thing she needs is to fall in love, and Nick doesn’t think he’s capable of loving anyone. When they meet, it is hate at first sight. Nick seems determined to ruin her plan for justice. He volunteers to mentor her. Then he refuses to do the job. Bay-Lee has no idea what Nick’s problem is, but she’s determined to find out because she is certain they have a lot in common. The deep grief and anger in his eyes reflects what is in her heart. She has a feeling they can save each other. The only problem is she can’t have both Nick and her revenge. Which will she choose?

but will they live long enough?

Trouble begins when a reaper uses Bay-Lee’s closet to cross over with a warning. Something is killing hunters on their birthdays. It’s a bad time to attend Van Helsing’s school, but she doesn’t have a choice. Her mother died in front of her eyes. She must have revenge even if it means risking everything including her own life. A student dies. Then another. Nick’s birthday draws closer, and Bay-Lee worries about losing the only boy she’s ever loved. Is she a good enough hunter to stop the monster before it strikes again?

Targeted Age Group:
14 and up

How is Writing In Your Genre Different from Others?
Anything goes here. If a favorite character gets killed, I know they can always come back to life. Along with the usual creatures of the night, I invented huge things called border monsters. The scene where Nick and Bay-Lee have to fight one of these awesome creatures is one of my favorites.

What Advice Would You Give Aspiring Writers?
Don’t give up. Read a lot and pay close attention to how other writers do it. Keep writing. This isn’t an easy road, but it is tons of fun.

Author Bio:
K.C. Blake is a ninja on the keyboard. When she’s in her office, no one dares disturb her. What they don’t realize is she’s not even in there. She’s in another world fighting vampires, falling in love with a creature of the night, and slaying monsters. Only her cat knows where she goes and what she does, and Blanca isn’t telling.

Born and raised in California, K.C. fell in love with books at an early age. Writing has always been her dream job. She now lives in the mid-west on a farm with cows, ducks, cats, and a dog.

What Inspired You to Write Your Book?
While others in my field have been writing about vampires and werewolves, I have been thinking about hunters. What is life like for them? What would it be like to be a sixteen-year-old in this world, knowing your fate is to become a hunter? I also had these two characters in my head for a long time, Van Helsing’s daughter and a rock star slash vampire hunter. For years I’ve wanted to write about Bay-Lee and Nick, but the time didn’t seem right until now.