You are here: Home / Fiction / Back Channel: The Kennedy Years by William Bertram MacFarland 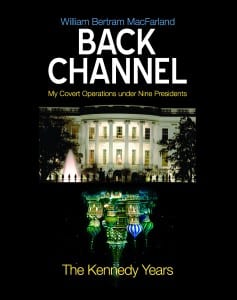 A fascinating story by a man who describes himself as a patriot, a soldier, a spy and an assassin. He is also a Special Assistant to President Kennedy and gradually becomes a personal friend of the Kennedy family. You’ll see what goes on behind closed doors in the White House and the Pentagon, join Bertie on a covert fact-finding mission in Vietnam, watch him cope with two KGB assassins and much, much more

What Advice Would You Give Aspiring Writers?
Stop hesitating. Just sit down and do it.

Author Bio
William Bertram MacFarland never sought – or even imagined – a role as a Special Assistant to President John F. Kennedy. Even less did he imagine continuing in the role of Special Assistant to the President in eight subsequent administrations. His degrees from Duke University were in Mathematics and Physics but fate and the U.S. Government extinguished any hope of a career in those fields. He slowly became a friend and confidant of President Kennedy in his (unsought) role as Special Assistant and tried in vain (and in disgust) to resign his position after President Kennedy was assassinated – but President Johnson would not accept it. The knowledge and “back channel” contacts that he had accumulated – and continued to accumulate as his career progressed – made him uniquely valuable to a long line of Presidents. His 50 year access to the highest levels of nine Administrations and the highly classified materials that they generated make him uniquely qualified to relate these riveting and spellbinding memoirs. His reputation as being totally incorruptible is not necessarily a good thing in government and the only thing that has saved him from assassination by officials in his own government is a vast collection of documents accumulated over the entirety of his career which resides in a safe deposit box in a Western European country – the key to which is held by a well known law firm in that country. Should he die under suspicious circumstances, those documents will be released to the public – at a horrific cost to hundreds of individuals and indeed, to the nation as a whole. He describes himself as a “patriot, a soldier, a spy and an assassin.” The description does not do him full justice. He was involved in intergovernmental intrigues at the highest levels and as a superbly trained and conditioned special operative, he was an amalgam of James Bond, Jason Bourne, and Jack Ryan. He is surely one of the American “cousins” described by John Le Carré. Bertie never sought glory or recognition for his contributions. He did what he did purely from love of country. He is a true American hero – who will forever remain anonymous and in the shadows.