You are here: Home / Bargains and Freebies / Bargain Books Under $3 / Aunt Bessie Assumes by Diana Xarissa 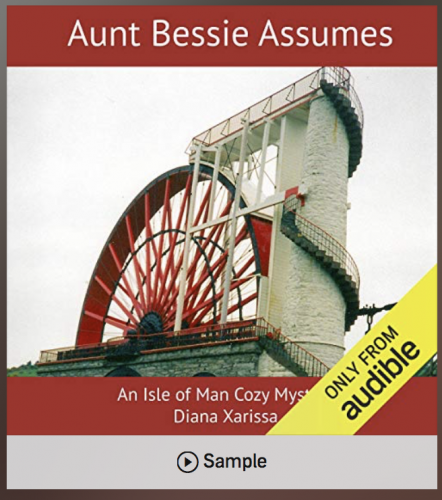 Aunt Bessie Assumes that she’ll have the beach all to herself on a cold, wet, and windy March morning just after sunrise, then she stumbles (almost literally) over a dead body.

Elizabeth (Bessie) Cubbon, aged somewhere between free bus pass (60) and telegram from the Queen (100), has lived her entire adult life in a small cottage on Laxey Beach. For most of those years, she’s been in the habit of taking a brisk morning walk along the beach. Dead men have never been part of the scenery before.

Aunt Bessie assumes that the dead man died of natural causes, then the police find the knife in his chest.

Try as she might, Bessie can’t find anything to like about the young widow that she provides tea and sympathy to in the immediate aftermath of finding the body. There isn’t much to like about the rest of the victim’s family either.

Aunt Bessie assumes that the police will have the case wrapped up in no time at all, then she finds a second body.

Can Bessie and her friends find the killer before she ends up as the next victim?

What Inspired You to Write Your Book?
I have always loved reading cozy mysteries, but I never thought I could write one. Then I read a very poorly written traditionally published cozy and realized that I could write something better than the book I'd just read. This book is just the first in what has become a long series. Book 23 was just published on January 17, 2020.

How Did You Come up With Your Characters?
The main character (Bessie) is loosely based on several British women that I knew over the years. (My grandmother-in-law and mother-in-law primarily.) Other characters have come from different times and places in my past.

Book Sample
Elizabeth Cubbon, known as Bessie to her friends, rubbed her eyes and checked the clock by her bed. It was 6:06, which meant her internal alarm was a few minutes off today. She frowned as she sat up in bed and pushed back the warm duvet. Slippers in place, she padded over to the window and looked out. The glow from the nearest street lamp gave her just enough light see the sheets of rain that were falling. She would definitely have the beach to herself this morning.
Half an hour later she was showered and dressed and waiting impatiently for the sky to lighten up a bit. Sunrise, this early in March, was still half an hour away. As rainy and overcast as it was, the sun wasn’t going to make much difference, but she waited for it anyway. A hot cup of tea and toast with honey and homemade strawberry jam helped to pass the time as she watched out the window for the sun to come up.
At quarter past seven, when the sun had risen enough to lift just a bit of the gloom, she pulled on her thickest waterproof coat and a pair of Wellington boots. An umbrella would have been useless in the strong wind. Bessie loved walking on the beach and she wasn’t about to let a little rain or wind stop her. It was, however, colder outside than she had realised and once she stepped out, she decided that today’s morning walk was going to be a short one.
As usual, she headed straight towards the water. Some distance from the water’s edge, she turned right and began her usual stroll towards the line of newer cottages in the distance. Most days she walked as far as the closest cottage before turning back towards home. In the summer she might walk to the cottages and well beyond. Today she planned to shorten her stroll considerably as the strong wind began to pick up and the rain streamed across her face.
In the dim light and pouring rain, she supposed it wasn’t surprising that she didn’t see the man until she had nearly tripped over him. One look had her turning around and heading for home. Even if she had brought her mobile phone with her on the walk, she couldn’t have used it in the heavy rain. She walked as quickly as she could back to her cottage, hurrying faster than she had in many years.
She dialled a number she knew well.
“Laxey Neighbourhood Policing, this is Doona, how can I help you?”