You are here: Home / Fiction / Historical / Ask my Ashes by Gabriela Azevedo 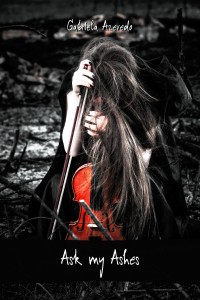 When the brilliant scientist Alan Campbell met Dorian Gray, he was fascinated by the beauty and eloquence of that young man, but the reality was other. In 18 months of friendship, Alan discovered Dorian’s inner ugliness in the worst way possible.

In Oscar Wilde’s ”The picture of Dorian Gray” there is a gap in chapter 14. After committing a murder, Dorian summons Alan to clean up his mess and hide the crime. Aware of Dorian’s real personality Alan refuses to do it, and Dorian blackmails his ex.friend using as excuse something bad that happened during the 18 months of friendship wrote in a letter he handed the scientist.

But the author never explained what actually happen, leaving Alan Campbell as a character without prominence.

If you ever questioned yourself about what may be that letter about, and how was for Alan those 18 months of companionship with one of the greatest characters of literature’s history, this novel is for you.

What Inspired You to Write Your Book?
Since the first time I´ve read ‘The Picture of Dorian Gray’, the whole book really affected me, but it was chapter 14 that made me wonder about a gap that Wilde left in the book.
Dorian Gray and Alan Campbell shared 18 months of intense friendship, and apparently, Alan was the one who broke up with Wilde´s main character. The reason why is the thing Wilde never told in this novel, or in any other piece of work. Some time later, in order to clean up the worst mess Dorian ever caused (not telling what it is in order to avoid spoilers!), he summoned Alan asking to help him, and since Alan refused, Dorian blackmailed him. So what happened between the two men that caused Alan to despise Dorian Gray and to deny him help?
I don’t think people realise the importance of Alan Campbell and his friendship with Dorian Gray. The 2009 movie version, for example, depicts Alan almost as a movie extra, without exploring their relationship, even excluding him from the most important part of the story (who has already seen the movie will remember the trunk in the River Thames).
So this book is the spotlight that Alan Campbell, this mysterious character deserves, and an idea of what happened in those 18 months that Oscar Wilde never wrote about.

How Did You Come up With Your Characters?
I had the beginning and the end of the novel, so the challenge was to fill the gap in the middle. In order to do that, I decided to create brand new characters, not to use all the ones that appears in ‘The Picture of Dorian Gray’, At least something had to be original, right?
So once I came up with the 18 months of friendship situation, the characters just came naturally. I always loved strong female characters, so Caroline, for example, was created to be romantic, but adventurous and clever. In the other hand, I needed her sister Constance to be the opposite. Speaking of Alan, I had to create more traces in order to make him the main character. As for Dorian Gray, I just had to follow what Oscar Wilde’s brilliant mind created.

Book Sample
PROLOGUE
When his portrait was painted, the young Dorian Gray became aware of his stunning beauty, and seduced by the words of his best friend, a handler lord defender of hedonism, Henry Wotton, he decided to make the most of his beauty and his youth.
The painting made by the artist who introduced him to Lord Henry made Dorian eternally young while the portrait soaked up the marks of his age and sins. If Dorian Gray would be good or bad to whom he involved in his sordid path, it doesn’t matter to him. He sticks himself to his goal of getting reckless pleasure at any cost.
Simultaneously frightened and fascinated with the image printed on the changing canvas, the most famous Oscar Wilde’s character was not sure about whom to blame for something he considered a gift and a curse at the same time, to the painter who immortalized him, or himself, who put into practice all his desires without considering the consequences. To Lord Henry and its harmful influence on the handsome boy when he was only a young naive, no blame was assigned.
Dorian Gray marked his path of cruelty with all the people he corrupted. After many libidinous, dishonest and selfish acts, his troubled mind led him to commit a serious crime.
Fearful for his life after the incident and for misrepresent even more his soul trapped in the portrait, Dorian summons to his house a man who was associated to him for 18 months and suddenly the friendship ended. The scientist Alan Campbell, the man with whom Dorian Gray was counting to hide the crime vehemently refused to help him. For him the friendship he had with Gray should fall forever into oblivion. After the end of the friendship, when the two of them met in public, Alan made a point by ignoring Dorian.
Still in his mansion, after several failed attempts to persuade him, Gray finally wrote two lines on a piece of paper and shows it to Alan along with a letter sealed and addressed. The scientist got horrified with what he reads in the paper, anticipating his future in case he refuses to help the criminal.
What was written on the note, and the content of the letter or the receiver’s name, Wilde did not reveal, nor what would happen if Alan Campbell refused to help Dorian. What is known is that the scientist was forced to surrender to the blackmail and clean the former friend´s mess.
Dorian was safe from prison and from the penalty for his crime, which at that time was the gallows. To Alan Campbell, moving on was not so easy. The chemist bear the weight of what he had done for a short period before committing suicide, taking with him the confession that could remove from society forever the corrupted Dorian Gray.
Chapter 1.
It rains. The night is freezing, but the grinding cold that shivers down my spine is much more severe than in any winter night. For silence I made an atrocity, I protected a notorious and nasty creature, a man that deserves to be buried down instead of the poor devil I had to turn into ashes. I shall condemn myself forever for being such a coward and surrender myself to such a cheap blackmail. But that on that day, on that moment sitting in the library reading those lines, I thought that it was better to tear me up inside, than lose the last valuable thing I had.
I sold my soul to someone that have traded his for pleasure, and still circulates around this city spreading its poison, protected by an immaculate mask of youth.
I cannot deny I have made a mistake and committed something unforgivable while been influenced, but at least my sense of moral do not allow me to rest my head on my pillow and sleep peacefully after what I did, unlike the criminal mind that forced me to become his accomplice. I shall not be able to annul all the bad things I have done with the end of my existence, but I can leave this world with the conviction that I am not entirely like him.
Looking back, the ravishing way I got involved still shocks me. As simply as many people in our social circle I got completely captive of that fascinating man. I believed that Dorian Gray detained all the qualities of a praiseworthy gentleman. Today, I know it was just a façade.
There were 18 months of a sick companionship that had knocked down my balance and turned me into a puppet. Even after some things occurred to open my eyes, I still let myself to be manipulated. Damned be the night I laid my eyes in that fascinating angel of evil. I can remember in details everything that happened since we met. The nights out, our trips, the pleasures shared, and the drama. Everything is hewn on my mind and refuses to leave me. But it will not bother me anymore. My dirty memories will leave me forever one way or another.

Buy Ask my Ashes On Amazon