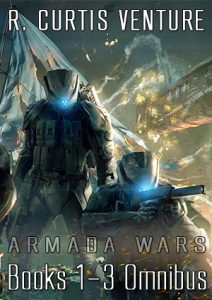 This is a collected edition of the Armada Wars story so far, which comprises the books ‘Steal from the Devil’, ‘List of the Dead’, and ‘The Ravening Deep’. These are the first three novels of a five-novel story, presented for the first time in one vacation-friendly value pack which provides an instant saving of almost 20%.

The Armada Wars series takes place in our own galaxy, centuries in the future. Populated with realistic characters, fascinating locales, and believable tech, the Armadaverse is the perfect setting for the one thing we all want from the military science fiction genre: big bad battles.

BOOK ONE: STEAL FROM THE DEVIL

All alone at the very edge of human territory, a clandestine Imperial facility has fallen silent for reasons unknown, and special operative Elm Caden has been tasked by the Empress herself to find out why. All Caden wants is a straightforward mission with a simple conclusion; what he finds is a woman whose mind is missing.

As the evidence begins to point to a hostile incursion, and the Imperial Combine rallies to mobilise a retaliatory strike against a neighbouring power, Caden and his companions discover a web of intrigue which becomes steadily more disturbing. Out there, in the darkness between the bright arms of the galaxy, something subversive and malignant has set its gaze upon the many worlds of the Empire.

Fill the Silence. Light the Dark.

What began as a border struggle has now erupted into open conflict. Humanity and the Viskr are at each other’s throats, and for the first time in a generation war is a credible threat to the many worlds of mankind.

Operative Elm Caden already suspects the Viskr did not attack humanity first, and he is determined to root out the fugitives he believes orchestrated the hostilities. But they have fled into the barely charted Deep Shadows, and after the battle at Woe Tantalum it is clear they are allied with a previously unknown power… a power as hostile as it is mysterious.

While the Imperial Navy engages the Viskr fleets, Caden and his companions — stoic soldier Rendir Throam, and redoubtable pilot Euryce Eilentes — have received new orders from up on high: find and kill Maber Castigon, before he can assassinate any more Imperial Shards.

But with the Viskr making increasingly desperate strikes in Imperial territory, such things are easier said than done. And through the gathering chaos along the border come the rumours. Whole colonies are falling silent, great ships prowl in the darkness between the stars, and the wind whispers a warning across the many worlds:

What Inspired You to Write Your Book?
This series of books was an attempt to write the sort of science fiction I wanted to see: grand-scale, sweeping stories in a robust and dynamic setting, but with physical and biological realism and no hand-waving or magic. I wanted to see what would happen in a plot which deliberately refused to use cookie-cutter plot devices and last-minute saves for the protagonists.

How Did You Come up With Your Characters?
The characters started life by asking myself the question “what sort of people would be caught up in these events?” and going from there. They were shaped by their environment, but given unique personalities of their own with quite specific histories. Each of the main characters turned out to be drawn well enough that they often tell me what to write for them.