You are here: Home / Non-fiction / Are We Walking To Alaska by JoAnn Dunlap Bayne 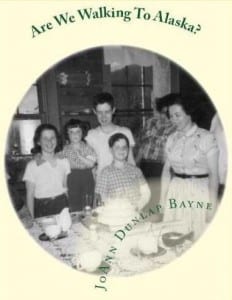 True story is written from the view of a nine year old girl (me).

Our family moved from sunny northern California in 1952, when I was 6. Our dad was a commercial fisherman and we started our new life living on a 20 foot fishing boat – our dad, our mom, my two brothers and me. Adventure was everywhere – from meeting up with a grizzle bear to finding a dead whale on the beach. Boats burned at sea, winds threatened our home, cats that swam in the ocean, accidents and illnesses in the wilds of Southeast Alaska, before Alaska became a state.

A book for the whole family – happy tales and frightening times – all seen from the eyes of a little girl, who discovered a whole new country and different ways of doing things. After a few years the family moved to the town of Sitka so the children could attend public school, and even more new and exciting things appeared – elevators, gas pumps, museums and new friends.

How is Writing In Your Genre Different from Others?
This is a true story – from my own recollections – and written in the voice of a nine year old girl – who moved from California to Alaska. California was modern and moving fast – Alaska was far behind and ways of doing things were much more primitive (washing clothes on a washboard in Alaska, when there were automatic washers and dryers in California, for example) and after we moved to town I discovered that the most primitive way in which we had been living in the fishing villages was not normal for town living, and so I discovered large stores, barber shops and elevators (which frightened me at first). You see these discoveries and the wonder of it all through my personal experiences. I was a bit of a curiosity to the town kids, as they were used to things in town, so I had a lot of catching up to do.

What Advice Would You Give Aspiring Writers?
If you feel it – write it. Now with self publishing there are so many more possibilities for writers. Don’t let anyone tell you it can’t be done. Work hard – write often – and put yourself out there so you book can be seen and read. Be innovative in your marketing.

Author Bio:
I was born in Sacramento, CA, in an elevator going up, in a hospital after a race with a train. When I was 6 ( 1952) we moved to far away Southeast Alaska (the part that runs down beside British Columbia). I lived in Alaska until 1964 when I moved to Texas to get married (my fiance’s father lived in Texas and we wanted out of cold, rainy S.E. Alaska).

I am also a nature photographer, as well as an author, and am working on a book featuring photos of Washington state. I have made quilts, love crafting and working with my hands. My husband and I go on day trips for photographing Washington and longer trips to Eastern Washington. We have three grown children, each with one son and adore spending time with family.

What Inspired You to Write Your Book?
I often told stories to my friends of growing up in Alaska before it was a state, and they would tell me I should write my stories down for others to hear. I shared small bits of my book on my blog and everyone loved it – so I began writing in earnest.

Link to Book for sale on Smashwords