You are here: Home / Fiction / Action & Adventure / An Involuntary Spy by Kenneth Eade

Seth Rogan was a shitty spy. Actually, he wasn’t a spy at all. Just a guy trying to do the right thing. As a biologist for the largest biotech company in the world, he had a great job, and thoroughly enjoyed all the perks. But when asked to do some tests on the company’s genetically engineered foods, he became entangled in a trail of corruption and fraud that he wanted no part of, but could not escape from. In a story so true to life it could almost be from today’s newspapers, Seth, having bit the hand who fed him, is on the run from them, and the full overreaching strength of the United States government as a fugitive, who finds temporary refuge with an old enemy of the U.S. But his peace is about to be broken as he finds himself in the role of an involuntary spy. 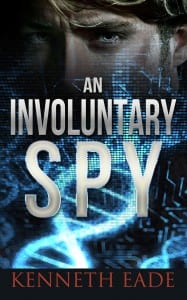 How is Writing In Your Genre Different from Others?
The genre of action/thriller/political rarely involves real conflicts or issues. Mine is a fictional account that could come from the headlines of today’s news.

What Advice Would You Give Aspiring Writers?
Write when the inspiration hits you. Spend time in the fresh air for inspiration.

Author Bio:
Best Selling Author Kenneth G. Eade is an international business lawyer, based in Los Angeles, California, specializing in international law, Internet Law, transactional and corporate law, complex business litigation, securities litigation, Contract Law, General Commercial and Business Law Matters, Licensing Agreements, and Mergers & Acquisitions. He is a member of the Bar of California, the federal District Court for the Central District of California, and the Ninth Circuit Court of Appeal. He holds a Juris Doctor in Law from Southwestern University School of Law, and a B.A. in Liberal Studies from California State University, Northridge. He is also an accomplished filmmaker and a freelance writer for the Los Angeles Daily Journal and an environmentalist and founder of http://beebay.org.

Mr. Eade was recently presented with a plaque by Martindale Hubbel for his 30 years of service to the community as a California lawyer. In his 30 years’ of practice, Mr. Eade has championed thousands of causes for individuals for their civil liberties and freedoms, and advocated the rights of small businesses and individuals against large special interest groups. Since its publication in September 2013, his book, “Bless the Bees: The Pending Extinction of our Pollinators and What You Can Do to Stop It” has been a number one best seller. He is an outspoken critic of pesticides and genetically modified food.

What Inspired You to Write Your Book?
When I was writing my best selling non-fiction book, Bless the Bees, I did a section on GMOs that inspired me to write a story to reveal their dangers.