You are here: Home / Fiction / Women's Fiction / An Embarrassment of Riches by Gerald Hansen 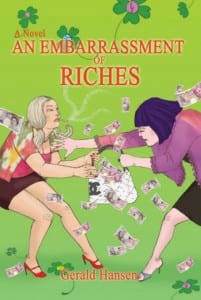 When Ursula Barnett and her husband Jed win the Irish lottery, they think their troubles are over. But they are just beginning. Ursula coerces her Yank husband to retire in her hometown of Derry, Northern Ireland, hoping to atone for her youthful sins as a collaborator with the IRA in the 1970s. At the first sniff of Ursula s lotto win, however, her chronically greedy sister-in-law Fionnuala Flood rallies the family against Ursula.

Fionnuala’s life is a misery. She is married to a boozing fish-packing plant worker and raising seven seedy hooligans, from a convict son to an eight-year-old devil-daughter who will resort to desperate measures to secure the perfect Holy Communion gown. Between two part-time jobs, Fionnuala still finds the energy to put into motion plans which pit husbands against wives, daughters against mothers, the lawless against the law and Fionnuala against anyone fool enough to cross her path.

Family saga and black comedy, love story and courtroom drama, An Embarrassment of Riches will take you on a journey to Northern Ireland and beyond, where Protestants and Catholics wage battle daily, and where crossing family with finance leads to heartache and hilarity, passion and tragedy.

What Advice Would You Give Aspiring Writers?
Finish that book!!! Quickly!!!

Author Bio:
Gerald Hansen lived for years in his mother’s hometown of Derry, Northern Ireland and attended Dublin City University. As a Navy brat, he grew up in California, Thailand, London, Iceland and Germany. His debut novel, An Embarrassment of Riches was an Amazon Breakthrough Novel semifinalist in 2010, Hand In The Till came out in 2011, and Fleeing The Jurisdiction in 2012. Gerald now lives in New York City.