You are here: Home / Fiction / Horror / AMERICAN REST STOP by The Unknown Screenwriter 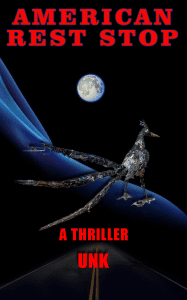 Over 17,000 murders have occurred at American Rest Stops since the early 1970s. 97% of those murders remain unsolved. To help her find the killer that murdered her family at a New Mexico rest area nearly a year earlier, a soccer mom cons a man suffering from dissociative fugue into believing that he is her husband and together, they continue her search for the rest stop murderer. American Rest Stop is JAWS meets SE7EN meets THE HITCHER but without the shark and an uplifting ending. More thriller than horror, it’s a fast and furious read but a horror movie for MOMMIES until the end.

How is Writing In Your Genre Different from Others?
Well, this book was difficult for me in the beginning because I’m a screenwriter. I’m so programmed to write short and concise and within such a rigid format that opening up and letting my imagination truly run wild writing a book was hard. It took me several hours of writing to eventually achieve any kind of a ZONE for this kind of writing and to be honest… I’m not even sure I hit the target. I’ve had several great reviews and pieces of feedback on ARS but who knows?

What Advice Would You Give Aspiring Writers?
Stick with it no matter what. Don’t write for MONEY. Write for YOURSELF and the money will COME.

What Inspired You to Write Your Book?
Making stops at rest areas all over the United States along with researching high incidents of crime at many rest stops around the country.