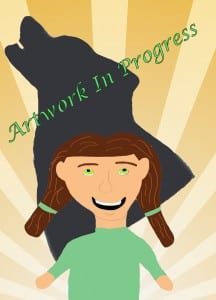 Before DWW was a witch, she was a mortal living in The Mortal Realm. She never expected that one day she would receive magical powers, especially not the type of magic known as witchcraft, and that she would become a witch when it occurred.

Many things would happen upon her becoming a witch, but that’s not what this story is about. This is the story of a mortal. The mortal‘s name was Allura, and yes, she would one day become DWW.

Allura lived with her mom, dad, and her dog. Her dog was a Golden Retriever named Trillman, and Allura believed that he was one of the smartest dogs around. Like many dog owners, she believed that Trillman understood every word that was said to him. She had no idea how right she was.

Trillman would one day become Allura’s familiar—which is a talking animal that teaches magic to magic users. However, because Allura was still a mortal, he was forbidden to talk to her.

Much later in her life as a witch, Allura would learn about the other types of magic users in existence. These magic users would include; wizards, sorcerers, sorceresses, and genies. Allura would learn that three of them; wizards, sorcerers, and sorceresses, are mortals but often have familiars to teach them magic just as witches and warlocks do. When this happens the familiars aren’t just allowed to talk to them but are required to in order to teach them magic, but it doesn’t say this anywhere in the rule.

There was also a rule that no magic user could tell a mortal their secret. This meant that even if a witch happened to discover that a mortal she knew was a wizard she couldn’t tell the wizard about her magical powers. The reason would simply be because the wizard is a mortal. If the wizard was a witch then she would be allowed to tell her secret. But, if the wizard were to discover the witch’s secret first, the wizard would be allowed to tell the witch their secret because it is not against the rules to tell a witch or a warlock. The above example would not happen to Allura, but it would happen to a witch she would know later in her life.

These two rules were often confusing, and luckily both would be changing in the future.

Besides Trillman’s secret and Allura’s future as a witch, there was one other secret being kept from her. This secret was about her dad. She would learn his secret even before she became a witch. That is what this story is about: Allura’s first magical discovery.

By the time Allura would become DWW, she would be under the belief that her parents knew nothing about magic and witches. She would think that they didn’t believe in witches, but this wasn’t completely true.

Allura’s dad knew about witches and magic and believed in it all. Did he expect Allura to become a witch? No, but he did expect her to have powers. Why? This would be because Allura’s dad had powers of his own.

It was Allura’s tenth birthday when her dad told her about his secret powers.

“You’re a shape shifter!” Allura exclaimed in surprise when her dad told her.

Beside her Trillman perked up his ears. Although he knew what Allura was supposed to become, he hadn’t known what her dad was.

“Yes, from The World of Shape Shifters,” Allura’s dad explained.

“Where is The World of Shape Shifters?” Allura asked.

“It’s a world that is connected to a place called the Other Realm. All worlds are connected to it,” he replied.

“Hey! I was supposed to teach her these things!” Trillman thought giving Allura’s dad a look.

Her dad noticed this and asked, “What do you want Trillman?”

Trillman continued looking at Allura’s dad for a few moments really wishing he could talk in front of mortals. He didn’t really see what difference it would make to tell Allura any sooner. If he had been alone with her he might have done it, but instead he looked away from Allura’s dad and started scratching his ear.

Turning back to Allura her dad said, “The Other Realm is a place of magic. This is where witches, warlocks, and their familiars live.” He then explained everything, including the Witches Council to her.

Her dad finished his explanation and answered some other questions Allura had asked him. Then said, “You now know everything I do about the Other Realm and how it works.”

“Okay,” Allura said, “but you didn’t explain about your world.”

“What do you want to know about it?” her dad asked.

“What kinds of shape shifters live there? I mean can they change into anything and is this where werewolves come from?” asked Allura.

“All kinds of shape shifters live there,” her dad explained. “Most shape shifters in this world only have two forms, but there is the legend of the Ultimate Shifter.”

“Yes, the Ultimate Shifter could turn into any animal species from both Realms and all worlds. She was born into our world back when it began. The legend says that long ago when shape shifters first appeared many of them were both predator and prey species. In other words, their two forms were natural enemies, he explained.

He continued, “ This caused much conflict with themselves and others. It also threw off the natural order of things affecting the world‘s balance between predator and prey. Because of this, the Ultimate Shifter was born to help our world learn to maintain balance. She taught us that one of our two forms is the dominant form. This is the one we are most comfortable in and will spend most of our time.” He paused before adding, “For me this is my human form.”

“Is there still an Ultimate Shifter?” Allura asked.

“No, but the legend says that the Ultimate Shifter will one day be reborn in the world or Realm that needs her help to restore balance,” Allura’s dad replied.

“So, what kind of shape shifter are you?” Allura asked.

“I am a human-wolf, and yes, I basically am a werewolf. The werewolf legend does come from The World of Shape Shifters. Because of this it is also often called the Were-World,” her dad explained.

“Why are you called a human-wolf and not a wolf-human?” Allura asked.

“Whatever the dominant species is comes first in our name. I would be called a wolf-human if the wolf was dominant rather than the human part of me,” her dad said.

“Okay, so what does this have to do with me?” Allura asked.

“You are ten now,” her dad explained. “At ten years old is when shape shifters acquire their shape shifting powers.”

“So they aren’t born with the powers?” Allura asked.

“No, they are born into one form and acquire the other later,” her dad said.

“But then that would be their dominant form wouldn’t it?” Allura asked.

“Not always,” her dad replied. “Sometimes when the new form arrives they are more comfortable in it and this is how they spend most of their time.”

“Will I be more comfortable as a wolf?” Allura asked.

“I don’t know,” her dad said, “and we won’t know until you have had your powers for a while.”

“When will I get them?” Allura asked.

“It’s hard to say. You might get them today, next week, a month from now…” her dad trailed off. “All I’m sure about is that you can expect them this year.”

With her dad’s help, every day for the next several weeks Allura tried to change into a wolf. She was never successful.

After a few months Allura began thinking she might not be getting any powers. Although he never said anything to her, Allura’s dad was beginning to think the same thing.

It was a week before Allura’s eleventh birthday when her dad made a hard decision since Allura still showed no sign of having the ability to turn into a wolf. According to the rules of his world, anyone living in the Mortal Realm that does not develop shape shifting powers must not know about the Shape Shifting world.

When Allura’s dad had left the Shape Shifting world, he had been given the magical ability to travel between Realms and worlds. Not long after making his decision, Allura’s dad transported himself to the Other Realm to see the Head of the Witches Council, a warlock named Trom.

“Will Trom be back soon?” Allura’s dad asked Zeus.

“I need to erase Allura’s memory of what I told her about myself, the world I come from, the Other Realm…” he would have continued but Zeus cut him off.

“I get it,” he said. “If you want, I can do it. Trom gave me this ability among others so I can help him out now that he no longer has an assistant.”

“Would you like to do it now?” the corn snake asked.

“Then you will have to take me to her and return me here afterwards,” Zeus said. “Trom didn’t give me the ability to travel freely between the Realms.

Trom returned to the Other Realm after Allura’s dad had left. Zeus explained to Trom what had happened while he was gone.

“So you wiped out Allura’s memory?” Trom asked.

Zeus was surprised when Trom said, “Good, it wasn’t time for her to know yet.”

“You mean she has the power?” Zeus asked curiously.

A week later Allura’s eleventh birthday arrived, bringing with it the promise of many magical discoveries and adventures to come.