You are here: Home / Fiction / Romance / Aisuru by Anma Natsu 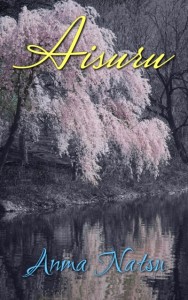 “It was madness to be more than her companion and caretaker…”

For the last eight years, Sakura Takeshi has been counting down the time till her life ended. Though she survived the attack that left her an orphan, it’s always been borrowed time as her damaged body continued to break down.

She told herself she was ready, that she had come to terms with dying before she reached 19. Then she found Kazuki lying wounded in her garden. His arrival opens the door for her whole world to change, but is it too late for her to learn to live, or to love, when there are only months left in her life?

Set in Hakodate, Japan, Aisuru is a young adult fantasy romance that will appeal to readers who enjoy shōjo manga and Japanese light novels, have a fondness for magical realism, and who are looking for something just a little bit different from the usual young adult romance.

If you’re looking for stories featuring abusive relationships, stalkery bad boys, or shallow, mean natured girls, this isn’t the story for you. What you will find are realistic characters, relationships built on mutual respect, and two hearts brought together just when they needed each other most.

What Inspired You to Write Your Book?
The idea for the story started with a single scene: a girl with long black hair walking through the rain before stopping to stand over a man lying on the ground reaching towards her. That scene kept coming back to me, making me wonder who she was, why he was lying on the ground, and if she helped him. The more I mulled over the story, the more scenes that came: the girl at the hospital, the man fighting his brother, and so forth.

As I worked on the story, one thing that was very important to me was making sure I depicted a healthy relationship between my characters – I’d seen too many young adult romances with abusive guys hailed as heroes and doormat girls letting them run all over them. Aisuru has none of that, rather Sakura and Kazuki’s relationship is built on mutual caring and respect.

How Did You Come up With Your Characters?
For the main characters, I knew early on that Sakura would be a reserved young woman, quiet from her years of self-isolation and a bit socially awkward because of it. With her situation and the events of the story, it was natural that she had to be an emotionally strong girl, capable of dealing with this things, but also not so strong that she would turn away a helping hand when needed. Her visual appearance just sort of came to me, I didn’t really have any particular model in mind.

Kazuki, on the other hand, is princely and grand, he likes to talk in a self-important way and obviously being the son of the king left him growing up a bit indulged and spoiled. Still, he has a good heart, something I felt would better be shown by his actions rather than his mildly narcissistic way of speaking at times. Of course, I didn’t want him to be too over the top or too self-absorbed or he’d have never been a good fit for Sakura, rather she helps him bring more of his loving heart to the surface and shed the last of his childish ways. His visual appearance was inspired by some favorite male characters from anime and manga, including Sesshomaru from the series “InuYasha” and Izark from “From Far Away”.

Book Sample
Sakura regarded the forlorn-looking yokai sitting across from her, taken aback by the whole messy situation but not least by his presence. She spoke carefully, “So, what will you do now?”

Kazuki looked up at her with a hopeful expression. “Actually, I wondered if perhaps you might let me stay with you here, for a little while. Yuji would not think to look for me here, so we would be safely separated until Father returns. Of course, I’ll gladly pay for the room and board, just name your price.”

Sakura couldn’t help laughing. “Somehow I doubt there is an exchange rate for the money of your world and mine.”

“True. My people do not consider the same metals precious that yours do. Most business conducted between our worlds is in trade of materials and the like, rather than money, but I don’t know how useful any such materials would be for you, and I presume you are not a trader who could sell them readily. Hmm, then might I offer to pay with myself?”

Her eyes opened wide as she stared at him. She could feel her eyebrows arching high. Surely he wasn’t offering that?

He quickly shook his head and waved his hands in front of him in denial. “I didn’t mean it that way, forgive me. I meant it as an offer of my services around the house. What do you call them?…chores, yes, chores. I admit I have not done much in the way of housework, but I’m strong and a quick study. No task would be too menial. I would be glad to help you however I can.”

She sighed in relief, and perhaps a bit of disappointment. Having a man who looked as good as he did wanting her would be thrilling. Of course, if she tried more than a momentary fantasy she would likely be dead. Talk about unsexy. Pushing aside her unruly thoughts, she realized she needed to give him an answer. The longer he stayed, the more they would bond, the more likely he would remember her later. He’d already lost his friend and possibly his brother. Pushing him away would be kinder, for both of them.