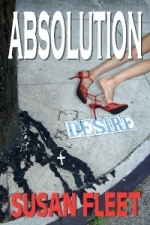 THEIR WORST NIGHTMARE . . . GETS WORSE
Vulnerable young women let a serial killer into their homes because they trust him. He tortures them, kills them and takes a gruesome trophy.
IS THE KILLER A PRIEST?
Best Mystery/Suspense/Thriller of 2009 — The Premier Book Awards

How is Writing In Your Genre Different from Others?
The only other genre I’ve published is non-fiction: music biographies and true crime cases. My passion is promoting talented female musicians, which I do on my website: http://www.susanfleet.com
I also blog about true crime: http://darkdeeds.susanfleet.com/index.html#.UcxJEpyYFaI
At DARK DEEDS: Serial killers, stalkers and domestic homicides, I report on actual cases.
My ebook has the same title, a collection of 12 blog posts. :

What Advice Would You Give Aspiring Writers?
Polish your work until it’s the best it can be! Don’t be satisfied with anything less than your best. Have other writers give you objective feedback on your work.

Author Bio:
Award-winning novelist Susan Fleet worked for many years as a professional trumpeter in the Boston area. While teaching at Brown University and Berklee College of Music she discovered her dark side and began writing crime fiction. In 2001 she moved to New Orleans, the setting for her Frank Renzi mystery series. Her award-winning crime thriller Absolution was published in 2008. DIVA arrived in 2011, Natalie’s Revenge, in 2012.
While teaching at Berklee, she created a course about 20th Century women musicians, jazz and classical. Her e-book, Women Who Dared: Trailblazing 20th Century Musicians, spotlights violinist Maud Powell and trumpeter Edna White. http://susanfleet.com/women_who_dared-vol1.html
She also blogs about true crime at DARK DEEDS: Serial killers, stalkers and domestic homicides. Now there’s an ebook. http://darkdeeds.susanfleet.com/dark_deeds_book.html#.UYvV_MqYFaI

What Inspired You to Write Your Book?
When I moved to New Orleans in 2001, a serial killer was terrorizing young women in Baton Rouge. Eventually, police caught him. My serial killer is very different, but the story could be ripped from the headlines. Bonus! Readers get to know my series protagonist, NOPD Detective Frank Renzi, and hang out in the French Quarter.