You are here: Home / Children and Young Adult Books / A Yellow Jellow, What Did You Say? by J.Kaylin 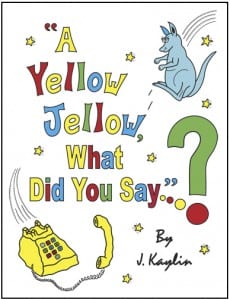 Author and Illustrator JKaylin would like to introduce you to The Murgle-Flurgle-Flickity-Tickity-Tat, The Nutton Glutton, and The Greatest Me!. “A Yellow Jellow, What Did You Say?” is a delightful ensemble of children’s poetical humor bearing the name of JKaylin.

This highly read slim paperback quickly emptied off bookstore shelves with its first publication in 1994. Yet aimed at an audience of children 3 thru 8, people of all ages still enjoy this inspirational packed volume of encouragement, silliness, wit, and humor. “A Yellow Jellow, What Did You Say?” is indeed a novel approach to children’s literature.

Author JKaylin’s close understanding of children and the child within in us all is evident in this delightfully written and simply illustrated children’s book. JKaylin has carefully put into these pages a liberal amount of insight, warmth, and laughter. He then has sprinkled them all with the essence of Dr. Seuss and Shel Silverstein.

Though this book is purely fun for its non-sense and silly wit, the content of “A Yellow Jellow, What Did You Say?” is also meant to encourage a child to think of themselves as something special, as they learn to discover and appreciate the wonder, awe, and magic of the highly versatile English language and the written word.

JKaylin is an author being described by some professional editors as the next generation in word play and funniness since the humorist writer of the 1920’s, Ogden Nash. “A Yellow Jellow, What Did You Say?” is an asset to any library, including any digital book library that you’ll want to take with you where ever you go.

Author Bio:
Jeffery Kalinowski who writes under the pen name J.Kaylin is the owner and manager of Twilight Art and Book Publishers. In this role, Mr. Kalinowski looks after, coordinates, manages, and leads all aspects of printing and the self-publishing of his own children’s books,including marketing, sales, and artistic design.

He is a qualified writer and publisher and holds the Highest Honors Associates Degree in Humanities from the College of DuPage. Jeffery Kalinowski is no stranger to writing, printing, and publishing having spent 20 years as an artist and writer, 15 years as a printer, and 5 years as a self-publisher, which taught him the importance of self-discipline, determination, perseverance, resourcefulness, and higher education.

Drawing on years of a variety of experience in the creative arts and in published media, Mr. Kalinowski now focuses mainly on self-publishing and getting his work to the public. Mr. Kalinowski’s varied background in computers, marketing, business management, writing, art, printing and self-publishing provided the perfect foundation for opening his own publishing company.

He is presently furthering his formal education, and has been inducted into the Phi Beta Kappa Society. Jeffery is available for private consultations on writing and self-publishing, and can be reached by email at: tweditor@jkaylin.c

What Inspired You to Write Your Book?
Why over the years this simple little book has had such a unique appeal to children and to others as well, I do not know. When this book with its original title, “A Yellow Jellow, What . . .?” went on sale for the first time, I got a phone call from a woman about my book and the effect it was having on her son. She stated that her child loved books; however, he would not read them for himself. Although he certainly could read well enough, he just had to have someone read his books to him; she couldn’t get him to just sit alone with a book and just read it by himself. Her main reason to call me, she said, was to tell me about this peculiar positive effect my book was having on her child, and she thought it important that I should know something about my book, which seemed to set it apart from her son’s other books.

“A Yellow Jellow, What . . .?” in particular, she said, was the first book that after she had read just the first few pages to her son, her son then insisted on reading the rest for himself. This really surprised her, she told me, because up to that point her son had shown no interest in wanting to read any book by himself. And she added, that wasn’t the only thing that surprised her, her son also wouldn’t let anyone else near the book until he was finished reading it. And although she couldn’t explain why my book was having this positive effect on her son, she hoped that it would somehow help him to feel more comfortable about reading other books all on his own, and for that, she was also calling to thank me.

Why did I write this book in the first place? Why am I writing a second children’s book similar to this one? I like playing with silly words, wits, and rhymes. I liked the Zizzer-Zazzer-Zuzz at the end of Dr. Seuss’s “ABCs”. I liked Shel Silverstein’s book, “The Missing Piece”, and I really liked, “The Real Mother Goose”. These books fascinated me when I was young. I read them and read them. I liked how they spoke to me, and sometimes from across the pages came a simple message wrapped in a certain kind of wit, humor, or in just plain silliness. I loved words. I loved how they sounded and were put together. I loved how they felt and how they made me feel. I don’t know how many times I read that last page in Dr. Seuss’s “ABCs” – The Zizzer-Zazzer-Zuzz.

One rainy lost Sunday afternoon, I watched the Cox children playing with a large broken toy calculator. The kids were pointing the inoperative toy out the backyard window, pushing buttons, and naming the different things they were imagining, which were then appearing on the back lawn from out the front of the broken toy that they were now calling the “making machine.”

I, being unable to rest in quiet or resist playing the game, asked them if I could play too. Then after they all quickly agreed to let me into the game, they re-evaluated and explained some of the rules to me.

We started playing the game by taking turns being in charge of the now re-invented toy calculator while the rest of us went in turn naming something we wanted to have made, and then to have that something magically projected out the front of the “making machine” and onto the back lawn.

When it was the eldest child’s turn to be in charge of the “making machine”, he held it all ready to go, steadfast and aimed, out the back window at the back lawn, while he waited intensely for one of the rest of us to start the game by announcing what we wanted made before he would push any of its buttons. Then finally one of us called out what we wanted made; then the eldest child with relieved tension push the first button; then he waited again for one of us to say what we wanted it made out of; then he would push a second button. Then someone had to say what color we wanted it to be, and then the eldest child would push the final button. Then there on the subdued wet autumn lawn, a top the wilting yellowish greenish grass and damp dark leaves was something all of us wanted to see, something all of us made up together, and something you could almost see if you really thought about it and looked really hard.

One of these times while the eldest child was pointing the “making machine” out the window just waiting to push a button, one of the three of us called out ‘telephone,’ and he pushed the first button; then one of us called out ‘jello’, and the eldest child didn’t hesitate and pushed the second button; then during a brief moment of contemplative silence somebody yelled out ‘yellow’ (which wasn’t me), and then they started laughing really hard. And that was it. In a few seconds we all got the accidental joke; and we all thought it quite clever what had just happened; and we all had a new reason for this being such a good game. Then I thought, I may have a poem out of it too.

This three-word combination became the poem that I later put with this book’s title, “A Yellow Jellow, What Did You Say?”.

“If I had a machine
That could make almost anything,
I’d make my wish
And pull its switch;
Then that machine
Would start to twitch;
It might squeak and squawk,
Bleep and blop,
And out of it would pop
A Yellow Jellow Telephone,
Bouncing with a jiggle jiggle,
And ringing with a little wiggle giggle.”