You are here: Home / Fiction / Action & Adventure / A Plague of Dissent by Nic Taylor 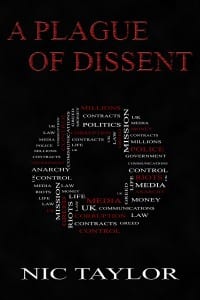 A spider web of intrigue, corruption and espionage; A Plague of Dissent paints a picture of the UK racked by demonstrations, strikes and riots. It is a story of a country where politicians line their pockets at the expense of their electorate, where corruption is rife amongst the police force, the banks and the corporate world and where the media hack in to private communications at will, in search of their next headline. It is an account of greed and corruption, where riots and civil unrest are turning the country upside down, and of a small group of men who are attempting to use the anarchy that is spreading across the country, to further their own agendas.

Into this nightmare scenario are dragged a young man Adam, his girl friend Isobel and his brother Dan a professional rugby player and England wing forward. They are pursued by the faceless men who believe they are party to information that could compromise their mission and have two choices, to run or, to turn and fight for their lives.

What Advice Would You Give Aspiring Writers?
The best advice I can give is perseverance, the world is always to egger to knock you down and you have to learn to get back up and keep fighting

Author Bio:
Nic grew up in Penzance, Cornwall and spent these formative years either hanging out on the beach surfing and diving or taking photographs. At the age of 20 he talked himself into a job as an architectural assistant with a prestigious practice in London and spent the next seven years designing banks and partying in the city. By the age of 27, the wander lust hit him and he headed off to Montego Bay in Jamaica, where he both ran a diving school and freelanced as an architect for hoteliers.

For five years he managed to keep this up and himself narrowly out of trouble. Until after one too many close calls, he decided it was time to leave. He boarded a plane and headed for Singapore to visit a Singaporean girl he’d got to know. There, he taught diving and escorted dive parties to remote locations throughout South East Asia, designed the odd hotel or two in the Maldives and Thailand and expanded his photographic repertoire to become one of the foremost photographers in the region.

He also diversified, into the moving picture industry to eventually shoot several short films and documentaries including Burning Earth for the Discovery Channel. Where he spent many weeks camped out in the burning jungles of Borneo and hung out of helicopters with a camera on his shoulder.

In 2003 he moved back to the UK, the move back was prompted by two very different reasons. Firstly, the events in the US on the 11th September 2001 changed Asia; it had always been a lively place to live and work but atmosphere had changed. Throughout Malaysia and Indonesia a pronounced anti western attitude was taking hold, culminating in the Bali bombings at the Hard Rock Cafe, where Nic used to hang out.

The second was his awakening to environmental issues. The fires he filmed were certainly one of the catalysts; another was the visible degradation of the oceans and reefs he couldn’t help but notice. The coral bleaching of the Maldivian reefs, the raw sewage pumped into the ocean by hotel developers, mangrove swamps destroyed to make way for prawn farms and the over fishing, all taking a horrendous toll, plain for anybody to see. All prompted him to be a part of the solution rather than ignore these issues as the majority of the planet seemed to be doing.

Nic now spends his time equally divided between his writing, research, working towards a PhD and the Plymstock Oaks Rugby Club, where he coaches, runs several projects including coaching disabled rugby and using rugby as social inclusion vehicle to get kids off the streets