You are here: Home / Autobiographies, Biographies & Memoirs / A picture of a dead horse by Trevor Herdman 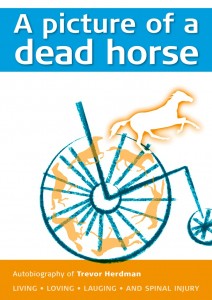 What inspired you to write your memoir?
It started with my wife always asking me to write down how we met and got together – I ‘hid’ from her for 10 weeks believing her to be married, which she wasn’t. It always amused her and told friends for years about it to embarrass me. During a long stay in hospital I wrote about but thought it didn’t mean anything out of context. I broke my neck when I was 19 and thought it would be interesting to write about that part of my life too. I found the process so enjoyable I carried on until I’d had enough and wanted to publish it.

About your Book:
In 1972 Trevor was an average teenager growing up in the North of England when he had an accident celebrating his 19th birthday. He broke his neck leaving him paralysed from the chest down. After discharge from Pinderfields Spinal Unit, all Trevor wanted to do was get back to his life of fun, friends, sport and girls. He had aspirations and ambitions too, but could he achieve them now his life was so very different? This is not a, ‘triumph over tragedy,’ or ‘woe me’ story though. It’s funny and frank with enough twists and turns to keep the reader wanting more as Trevor’s life unfolds.

How did you decide how to publish your book and where is it published through:
I didn’t think any publisher would be interested in it and decided to self publish as an eBook. I used Guido Henkle’s excellent guide which uses HTML. I’m comfortable with HTM and it was perfect for me as the book contains photographs.

How do you see writing a Memoir as different from writing other genres of books?
It’s easier than fiction because you’re writing about the one thing you know better than anything else, yourself. However, no one wants to read a boring catalog of events. The challenge is make your life interesting and keep the reader wanting to know more.

Author Bio:
Trevor Herdman was born in Doncaster, South Yorkshire in 1953, the son of a Train Driver And a ‘Housewife.’ He sustained a Spinal Injury at the age of 19 following a diving accident he freely admits was the result of him, “showing off.” He has a degree in Economics and worked in Local Government for 25 years, 18 as Leeds City Council’s Principal Disability Equality Adviser – yes, that really was his job title. Trevor competed in the Paralympics in 1984, is an avid sports fan, particularly his beloved Doncaster Rovers, loves books, music, comedy and art, especially sculpture. He’s been married for over 30 years, and has 2 children and 9 grandchildren.