You are here: Home / Bargains and Freebies / Bargain Books Under $3 / A Not So Immaculate Conception by Crystal Estell 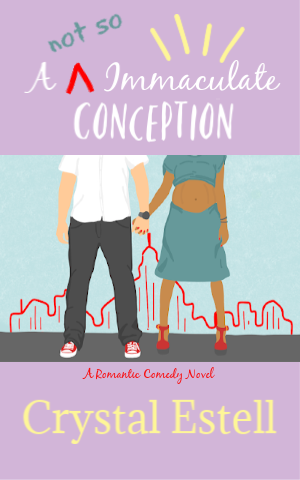 “KNOCKED UP meets THE PROPOSAL in this guaranteed laugh-out-loud romantic comedy!”

Then, she had the most toe-curling dream ever—only it wasn’t a dream. And the blurred image of the charming, hot guy she once considered a figment of her imagination, just became the poster boy of her worst nightmare when she finds herself pregnant with no clue who the mystery man is.

The reason for her foggy memory? A case of transient amnesia brought on by… well… only the most mind-blowing… she’d rather not say.

Nonetheless, her boss is not having it. Terrified of unemployment and with her ten-year plan up in smoke, Lacey does what any woman with more brains than curves would do. She announces her co-worker Zak Cooper is her fake husband, then begs him to play along—just until the private investigator can give her answers.

A set of unforeseen circumstances.

Fake kisses turned all too real.

And now she’s torn between a man she’s falling for and an unreliable list of potential fathers. With the delivery soon approaching, she must decide if life is better lived or planned.

**All intimate encounters in this novel are consensual**

What Inspired You to Write Your Book?
I encountered a patient with sex amnesia who would forget her intimate encounters with her spouse.

How Did You Come up With Your Characters?
I needed to have a personality type that would be completed disrupted by a surprise pregnancy and case of sex-amnesia, and who better than a type A workaholic with her career at stake?

Book Sample
No longer relaxed, he cradled her face as his mouth grazed hers, once, twice, each time an explosion of pleasure inside her that left her wanting more. And he delivered, pressing his parted lips firmly against hers, drawing her into the open space between them, driving her to faraway places she had never been. Kissing was not new, kissing him was not new, but kissing him for real—was very new. She never wanted it to stop—