You are here: Home / Fiction / Mystery/Suspense / A Necessary Act by Tony Wirt 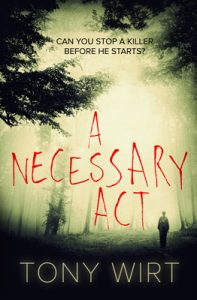 Can you stop a serial killer before he starts? If so, should you? How far would you go?

The students at Lake Mills Community High School knew there was something wrong with Scott – but what David saw firsthand was more than they could ever imagine. He and his best (only) friend Matt were content to keep their suspicions to themselves until a simple trip to the library sets them on parallel trajectories where even the most careful plans have unexpected consequences that can rock a community and reverberate long after they’re gone.

Fifteen years later, Matt loses his high-profile reporter gig and is forced to return to the town he did everything he could to leave behind. He gets a shot at redemption with the small-town weekly where he started and quickly discovers a community that has moved on from the past. Well, everybody but David. He remembers everything and doesn’t buy a thirty-something Scott’s “normal” act. There’s a madman hovering inside. After all, some people never change, right?

Something the entire town is reminded of when the first dead girl turns up.

What Inspired You to Write Your Book?
I love stories with unintended consequences. When a character does something with the best of intentions only to have it blow up spectacularly… NOW what do you do, character? That’s when a story gets interesting for me. I saw a lot of that in Tales From the Crypt as a kid. Those Hitchcockian twists always kept me riveted. “How did they even THINK of that?”
And I’m not getting into spoilers here, but it’s safe to say things don’t always go smoothly for the friends I introduce you to in A Necessary Act.

How Did You Come up With Your Characters?
My story is told through the eyes of two protagonists, Matt and David. When we first meet them, they are a boring pair of completely normalized high school students. Then an… event… happens that changes things dramatically. The story shows the different paths two similar people can take in response to a dramatic catalyst.
And then there is Scott, my antagonist. I LOVE bad guys. Always have. Hannibal Lechter, Vader, Anton Chigurh, Annie Wilkes… sign me up. I’m not saying Scott can hang with those titans, but I dialed up the creep factor as high as I could, and he ended up being a lot more twisted than I gave him credit for.

Buy A Necessary Act On Amazon