You are here: Home / Fiction / Historical / A Murder in Auschwitz by JC Stephenson 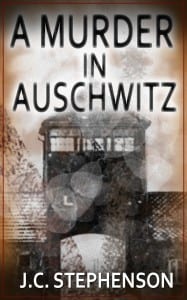 An SS officer is found standing over the body of a comrade, a smoking pistol still in his hand, a murder in a place of murders.His pleas of innocence force a court martial and he knows that there is only one man in the camp capable of defending him; a Jewish prisoner called Manfred Meyer.

Manfred Meyer is forced to build a defence for him in his court martial. Drawing on his years of experience as a criminal lawyer in Berlin, Meyer must unravel the deceit and interpret the lies that infect the concentration camp and work to have him found not guilty.

Following Meyer and his family through their lives in Berlin, the Nazi rise to power and their inevitable arrest and incarceration in Auschwitz, Meyer will do almost anything to see his wife and children. Almost anything.

Can his abilities as a lawyer interpret the facts of this seemingly impossible case? As a Jew, should he even defend an SS officer? And is he actually guilty of this crime?

But the officer must be found innocent if Meyer is to see his family again.

This story follows Manfred Meyer, from his beginnings as a lawyer in 1930s Berlin after being taken under the wing of the city’s most capable defence lawyer in the most prestigious law firm in Germany, Bauer & Bauer.

Meyer’s confidence and experience build as his cases become more complex and more difficult to defend. His success is widespread and he, his wife Klara and their twin daughters live a comfortable life in the capital.

But Germany is changing. The Nazi Party has come to power and Meyer’s Jewish heritage has become a crime. Life becomes more and more difficult until even in spite of Meyer’s connections he is forced to leave his position as Bauer & Bauer’s pre-eminent lawyer.

Then, one night, the inevitable knock at the door heralds the long train journey to the east and the death camps of Poland for Meyer, his wife and his children.

Split from his family on arrival, Meyer does what he can to survive in a place designed for death. He stays alive with help from the other inmates he has befriended, helping each other through the long days of hard labour, his only wish being that he could see his family again. A forlorn hope until circumstance throws a real chance his way.

How is Writing In Your Genre Different from Others?
You really have to get your facts right. You can be allowed a certain amount or artistic license, but the details have to be right.

What Advice Would You Give Aspiring Writers?
Stick with it but if you get stuck leave your story alone for a while and let it wander about your mind. If you are really stuck, write the end of your book first and then work towards that.

Author Bio:
J.C. Stephenson was born in Scotland and grew up in the town of Livingston in West Lothian. He has worked in the newspaper industry for most of his working life in various roles; as a compositor, a graphic designer and in IT but never as a journalist.

Although ‘A Murder in Auschwitz’ is J.C. Stephenson’s first novel, he has been writing on and off his entire life.

J.C. Stephenson currently lives in Fife with his wife and two children.

What Inspired You to Write Your Book?
What happened in Germany in the 1930’s and 40’s is such a dark period in human history. It happened in Germany but it could have happened anywhere. An entire population was discriminated against and they were normal people, lawyers, doctors, shop keepers, clerks, street sweepers. I wanted to see if I could take a successful lawyer, one who was not even a practising Jew and take him on a journey through his successes and to the inevitable incarceration in a concentration camp and what a man like that would do to survive there.

I wanted to explore what would constitute a murder in a place where killings were made every day.