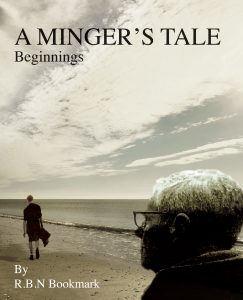 What inspired you to write your memoir?
“Do greener pastures exist for the colour blind – & how would they ever know?”

About your Book:
Ribban Bookmark is one of life`s misfits. Born in Manchester, UK in the late 1950`s to Irish immigrants. He realised early on in life that his ladder to success was missing some rungs – in fact most of them. His search for life`s greener pastures, hampered by his colour-blindness. After 56 years circling the literary world’s perimeter fence, like a dog looking for somewhere to urinate, he stopped one night in August 2014. “A Minger`s Tale-Beginnings” were the result of that nights urination.
The book traces his humble beginnings from the back streets of Manchester.
He stands out in school with his bright red mullet and wearing one of the flowery Hawaiian shirts donated to the family by his aunt in Honolulu.
It follows him from aged five, through to his mid twenties where we leave him standing on a northward bound train platform in Peterborough having spent a weeks holiday in a POW camp in East Anglia.
This is his story part one.

How did you decide how to publish your book and where is it published through:
Createspace were a big help. Self publishing is the only economically viable option for new authors.
Publishing it through Amazon was a no brainer as they are without question the biggest player on the Ebook scene.
It is all about exposure these days.
The hard work of writing a book pales in comparison to the harder work that lies ahead afterwards.

How do you see writing a Memoir as different from writing other genres of books?
So many emotions came into play as I wrote this first book.
The book is me and I the book.
The personal side of a memoir touches everyone -not least the author.

Author Bio:
The Author
……..In brief

Originally from Manchester, I left the damp north of England behind me and exiled myself to the frozen north of Scandinavia where I have remained these last 25 years.
My writing started 3 years ago after a long hiatus. Urged on by family and friends
A Minger`s Tale-Beginnings eventually saw the light of day in March 2016.
The books quirky humor while portraying the flipside of life from the 1970`s to the mid 1980`s has endeared itself to readers on Goodreads, Amazon aswell the bloggers of Tometender and Tickmick. Both of whom have featured and reviewed it.
In 2015 I entered a rough outline of the second books first chapter as a short story to The Shelagh Delaney Writing Competition. The story was longlisted and will appear in a forthcoming anthology to be published later this year.