You are here: Home / Fiction / Historical / A MASTER PASSION by Juliet Waldron 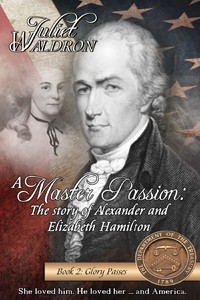 THE MASTER PASSION is the story of the marriage of our brilliant first Secretary of the Treasury, Alexander Hamilton, and his wife, Elizabeth Schuyler. It begins with a whirlwind Revolutionary War courtship at Washington’s headquarters.

Conflict is built into this marriage.

“…And hence one Master Passion in the breast

Betsy’s passion is Alexander. Hamilton adores his wife and children, but sometimes he loves America more.

What Inspired You to Write Your Book?
Alexander Hamilton has been in my life since I was ten, with his rags to respectability—never riches—tale. He came to America, like so many others, with nothing but the head on his shoulders. As a teen, he fought for freedom. He won the respect of the commanding general and gained the hand of a lady–a romance conducted in a romantic (and dangerous) time. Later, he fought tirelessly to get his brilliant—but far-less well-informed colleagues—to understand and accept his financial plans. If Alexander Hamilton hadn’t created a system to unite those thirteen colonies by getting them to agree to pay the debts incurred to our fighting men—and to the businessmen who’d backed the War of Independence—the United States as we know it would have never happened.
He was also a child born into a broken family, who grew up surrounded by poverty and neglect, but still who managed to grab destiny with both hands. His story is old-fashioned heroic.
Hamilton is such a protean character, that in order to produce a coherent whole I’ve had to omit whole episodes—important people and places—or conflate events, which I hope readers will forgive. I wanted to focus on his family relationships.
Scarred by childhood violence, poverty and humiliation, Hamilton could be vain and brash, impatient with slower minds. He injured his friends and family with a sordid love-affair. His insecurity and his fury towards enemies who dragged his good name through the mud caused the political missteps which destroyed his political career. He might even be seen as the engineer of his own death.
So that’s my subject: a great man with Shakespearean fatal flaws. I’ve tried to I tackle this story in my own way, often through the POV of his loving (and often) dismayed wife and through the form of an old-fashioned historical novel.

How Did You Come up With Your Characters?
These are historical characters, the trajectory of whose lives are well known. At least–Hamilton’s side of the story! As is usual when dealing with our “foremothers,” the material is sketchier. Betsy Schuyler’s life was a long one, but because she, like many 18th century women who were married to famous men, destroyed most of her personal correspondence, her side of the tale can only be inferred. Betsy was clearly a strong, determined woman, and a great lady. She stood by her man for fifty years after his death, proudly snubbing ex-presidents and anyone else who had injured her husband during his all too brief life. I began “A Master Passion” through an obsession with Alexander, but, as I wrote, I came to equally love, admire and respect his wife.

Book Sample
Sharing a sick feeling, Alex and Jamie Hamilton stood on barefoot tiptoe and peeked through flimsy wooden louvers, all that separated the rooms of their small West Indian house. Both boys were red-heads, but there the resemblance ended. Eleven year old James was well-grown and strong. Alexander, seven in January, was delicate, fast-moving and nervous, like a freckled bird.
“An idiot would have known not to trust him.” The beautiful dark eyes of their mother flashed. Rachel faced her husband, a slight man of aristocratic feature, who wore a white linen suit. Like him, it had seen better days. His wife’s tone was challenging, her arms akimbo. Her stays, containing a generous bosom, rose and fell.
“I—I—took him for a gentleman.” Father sputtered, attempting to fall back upon a long ago mislaid dignity. “He gave me his word.”
“His word!? Which means bloody nothing! How many times did I tell you what was going to happen? How many times?”
“Shut your mouth, woman!”
A sharp crack sounded as he slapped her. Rachel, hair spilling from beneath her cap, staggered backwards. From the kitchen came the fearful keening of Esther, their mother’s oldest slave.
“There’s naught canna be dune noo! James Hamilton, his long face flushed, roared the words. Scots surfaced whenever he was angry.
“Yes, nothing to be done. As usual.” A livid mark glowed upon Rachel’s face, but she, with absolute disregard for consequences, righted herself and finished what she had to say.
“This time Lytton’s going to let you go. And if you can’t even manage to hold a job with my kinfolk, where will you get another? What are we supposed to live on? Air?”
In spite of the fact that it was winter on the island, the best weather of the entire year, Alexander shuddered. Distilled fear slid along his spine.
How many times in his short life had he watched this scene replayed? Listened to Mama shout Papa’s failures, watched as his father, humiliated and enraged, used his fists to silence her?
A business deal gone bad! Money lost….
Will we move again?
Every change of residence, from Alexander’s birthplace on cloudy Nevis, to St. Kitts, and from there to St. Croix, had carried them to smaller houses and meaner streets. The carriage, the two bay horses and the slaves who tended them, were only a memory.
Mama was shrieking now, about loans and due dates, things which she declared “any fool” could understand. Frozen, knowing what would surely come, Alexander watched as his father, crossing the room in two quick strides, caught his mother by the shoulders.
With the strength of rage, he threw her like a rag doll. She struck the wall so violently the flimsy house shook. Small emerald lizards stalking the mosquitoes drawn by candlelight, vanished into shadow.
Silenced at last, Rachel crumpled to the floor, sobbing. Her once gay calico dress, muted by many, many launderings, lapped her. The under shift, always scrubbed to a sea-foam white, drifted from beneath.
James Hamilton, breathing hard, blind with rage, tore open the door and strode past his cowering, terrified sons. For the last time, Alexander saw his beloved father’s face, a sweating mask of fear.