You are here: Home / Fiction / Historical / A Housefly in Autumn by Scott Nagele 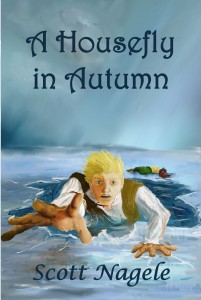 At 17, Anders Christiansen was a young man overflowing with potential. All his teachers believed he was destined to blossom into a leading man of letters, enjoying a life of rich rewards.

That was before the accident.

Now, Anders’s great talent lies fallow. He can’t produce the complex ideas he once did. His thoughts are slow and his words simple. The world holds little promise for him anymore.

Struggling to build a meaningful life out of the wreckage of his dreams, Anders learns the value of simple treasures. Loyalty, devotion, and even sacrifice hold rewards of their own to renew hope after tragedy. Love can cause hurt, but he who gives love when he hurts the most will reap a joy outweighing the pain.

Anders gives meaning to his life in the way he spends it. He will face grave danger to spare those he loves, and though his gifts be diminished, he will share them freely with even the humblest of children. Though never sought, Anders’s reward is immense and enduring, showing the millions of reasons to go on sharing even the simplest of gifts.

What Inspired You to Write Your Book?
This novel began as a short story for a book of stories I was writing about people and their relationships with dogs. I liked it too much to leave alone and soon found myself expanding it to novel length. The original was meant for Middle Readers and was told in a fairy tale fashion, but as the book grew, it also grew up. Now it is more appropriate for Young Adults and even adult readers. There is still a dog prominent to the story, but she plays a shorter role than in the original short story. I hope there is still some fairy tale magic in it, but the book itself is not told in fairy tale fashion.

How Did You Come up With Your Characters?
Once I discovered the premise of the story, the characters readily presented themselves to me. In the time I’ve spent with them, they have added layers of depth to themselves, but, with a few exceptions, they are the same cast that stepped forward to tell the story when it was a much shorter piece.

Book Sample
Anders gasped for breath, but his mouth was below the waterline. He coughed, expelling as much water from his mouth as he could without letting more water in. His lungs burned for a fresh breath of air.

All it would take was a kick of his legs or downward thrust of his arms to raise his head and breathe, but he could no longer feel these limbs, much less move them. Icy water had taken them away. Whether he still had such things as arms and legs was an uncertain point. Only the darkness was certain, and his face was falling down into it.

Something caught him, stopping his descent into darkness. With strained deliberation, it raised him. His nose came out of the water and he breathed. His mouth emerged and he gasped. Air filled his lungs and light shone on his face. With this came a precious streak of hope.

Then the streak of hope began to fade.

He sank again. The unknown force holding him up relented to the power of gravity. Water crept over his mouth. It consumed his nose. The light, with its fleeting hope, was extinguished by the darkness that came wet to his eyes.
His lungs ached for another breath, but there was no way to get it. He stopped sinking, but that which held him did not raise him again. A finger’s length below the surface, he was drowning.

It wasn’t supposed to turn out this way. Anders wasn’t meant to die at 17. There was so much he was supposed to do with his life.

The darkness flooded in, forcing him outside of himself and into a world of limbo as he drifted toward death. This was not the ending intended by his beginning . . .

Buy A Housefly in Autumn On Amazon